Shadow Armor was needed pre AoV when every bosses' attacks need great anticipation by using defensive skills and heals. (Miss those times :'( ) thus the Shadow Armor was there to safe the day. (Lol I remembered I parried Ratmaster's attack to only 500 with Shadow Armor. Really helpful!)

First of all, you should wait until the thief skill balance to be applied in the game. The updates would be:

- Penetration will be enabled. This stat enables you to pierce through your enemies defenses. (When it activate, your attack will deal maximum damage without being reduced by enemies' defenses.)

- Maxed Mark of Genocide will give you 10% bonus critical rate in comparasion to the current MoG which is only 2%.

- Grimtooth will no longer heal you per hit. Max level Grimtooth will give you bonus attack power, reduce enemies' movement speed, increased damage (the increased damage is said to be very high, around 700% max level in contrast to the current Grimtooth which is only around 300%+) but lower heal and only heals maximum 10% of your HP (currently 18% HP maxed Grim)

- Ymir: Cthulthu will increase your Penetration by an amazing amount. You wouldn't want to ditch this now.

- A lot of thieves basic skill revamps. Like Cross Impact that deals 700%+ too maxed compared to the currrent CI which deals only 255%.

I don't really want to start another class discussion here, but it's a bit strange that there is no VCR thread commenting these changes in more detail.

The informations I've given previously were from a friend of mine who happen to play in a server which follows NA's updates.

And below is the translation of the whole point #3 which discusses the whole thieves changes:

In this update, there will be changes on the Thief, Rogue and Assassin class. 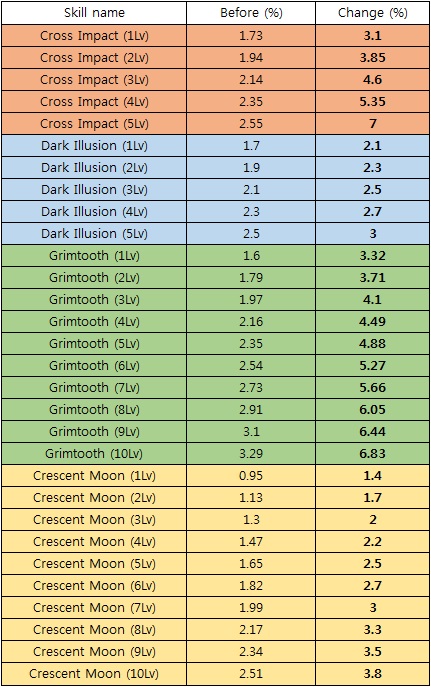 - Duel Stab: Previously, the duration of Detect Weakness buff was 5 seconds. After the update, it will be changed to 10 seconds.

- Mark of Death: An addition of 5% of Movement Speed (MSPD) debuff for each skill level (5% to 50%) will be added after the update while still retaining the current effect.

- Grimtooth: Previously, Grimtooth heals the caster by [number of enemies hit * HP recovery effect from the skill (9-18% each level) = Total HP recovery]. After the update, the skill will be changed to 10% HP recovery, increases Attack Damage and gives a 50% movement speed debuff to the enemy.

At least, now I know who 'screwed it'. Still makes me wonder if our VCRs tested and agreed with the changes already.

I know that I am criticized for having a 'disagree mode' or something worse, but all these changes seem so random... not the slightest reason recognizable.

I apologize for the harsh words, but for me that's bull-_- bingo!

And all I would ask for is some something like:

"We think the Assassin requires a slow effect that hits up to 10 targets, because <enter a silliy reason, because that's better than none>. We added the effect to a skill with a 10sec cooldown so that the targets can be afected the whole time, 'cause otherwise <enter any unrelated drawback here>."

"We think it's reasonable to boost the effect of Mark of Genocide by 400%, making this skill the seemingly best buff skill of all classes, because <enter a causal chain here> prevents Thieves from being useless in raids."

Hmm, I'm actually rather inclined to agree with your opinion on the Crit Rate buff - most tend to forget the 2% affects the rate, not simply the agi. 5% would have been alright, but 10% IS a phenomenally huge increase, considering how agi currently affects crit rate. Alternatively, I'd actually prefer it to be swapped with Shadow Claw's 5% and let the personal buff be higher.

Not going to comment on penetration until I've seen/tested it properly in-game - haven't really tried it out yet.

Hmmm, I'm still not fully sure why you're so adverse to the heal-factor in general - it's already been reduced to 10%, regardless of number of targets, no? (I might be wrong; actually missed the patch notes before it was taken down). Granted, the game is unbalanced as is, with +20 refines jacking up all the defense systems etc, but putting that aside, sins are a melee class without additional dodge bonuses and low defense. We kite, and/or withstand blows we are dealt at near-range (in PVE). SArmor, and this heal factor is supposed to help add to our survival rate - likewise, while the slow could be removed, it is somewhat in-line with this perception of sin gameplay, imo.

Now, is it balanced? No, but then again, all classes aren't - not primarily because of skills, but because of refinement/hones/etc. (in my opinion anyway). Do I think it's fair some classes can 1-hit me at +20 refined gears? No. But it wouldn't be fair for me to call 'OMG NERF [one-shot skill] NOW' because hey, at lvl 50-ML20 without refinement, it might be necessary/just enough for players to deal with PVE mobs. (I don't play all other classes, so I can't comment there either.) At the heart of it, it's less of a skill issue than it probably is a seed/hone issue - and that's something devs really need to look into if they really want balance in-game.

The following is from the Gravity developers:

l  Assassin is melee damage dealer that inflicts even greater damage to target with higher DEF.

1.     The effectiveness of skill that inflicts DOT damage will be improved.

Although Assassin is a melee damage dealer, it lacked differentiation from other damage dealers. To improve this, we will make Assassin as the Class for dealing significant damages to targets with high DEF. In other words, higher the DEF of a target, more damage Assassin will inflict. And to prevent unbalance of power, the enhancement will be made based on DOT damage skills.

Well, the higher DEF the higher damage ain't gonna happen to I suppose. Instead of that, they will implement Penetration that will be viable on all classes. Not sure if other classes will get the balance that was planned before I suppose. :/

Hmmm, I'm still not fully sure why you're so adverse to the heal-factor in general - it's already been reduced to 10%, regardless of number of targets, no? Granted, the game is unbalanced as is, with +20 refines jacking up all the defense systems etc, but putting that aside, sins are a melee class without additional dodge bonuses and low defense.

I am not against a 10% heal in general, but it's IMO unnecessary, since there are better options.

And even if there would be a necessity for a heal skill, I think Grimtooth is the wrong skill.

The pre-AoV concept was to give melee classes a higher defense rate (defense is similar to an automatic trigger that heals some portions of the damage immediately). Because tanks and off-tanks were the only classes that had to sustain high amounts of damage regularly, they got a higher defense and a low healing skill. Assassins and Rogues had the second best defense, better than for most ranged classes. In addition, the Assassin had the best defensive skill (Shadow Armor) in order to survive boss AoEs.

Right now, the defensive bonus (twice as much defense on gear compared to magical classes) is accompanied by a slightly higher HP total (13pts per VIT). On top of tha, Shadow Armor was improved (the only defensive skill that was boosted (well, maybe beside Smoke Bomb)).

SArmor, and this heal factor is supposed to help add to our survival rate - likewise, while the slow could be removed, it is somewhat in-line with this perception of sin gameplay, imo.

Any class wants/needs skills that help with the survival rate. The question is which method to choose.

F.e. a slow effect is only useful, if you can deal damage over a distance (or if you have powerful DoT). Because the Assassin is a melee class and doesn't fulfill this criteria, I'd call the slow 'contrary to the sin gameplay'. The Assassin also has a speed boost already, which is basically a speed debuff for anyone else.

The same is true for heal skills: Why add another heal effect for 1vsX combats only, if there are pots & soups? (There are healers in group-PvP and heal pets in PvE). And what is the reason to prefer a heal effect over other things like a dodge bonus, a better (temporal) defense or a higher HP total?

The only reason I can imagine is: A healing skill isn't reactive. You get the benefit even if the you don't get any damage in return (f.e. your opponent attacks someone else, misses, is stunned, etc.). Don't know if this makes up a good 'pro-heal' argument.

A 700% Cross Impact deals more damage than a Deadly Blow or a Dark Illusion and is quite as powerful as a Shadow Explosion at level 5 (850% damage; 20sec cooldown; requires 5 combo points). Until you reach the master levels, this skill could become dominant in every skill build. So IMO it doesn't really improve 'variety'. Let's try a few alternatives:

Suddenly, it's either +326% more damage for the Shadow Strike versus a 30% chance to trigger a free 1070% damage on the next Shadow Explosion. Would you still prefer Shadow Strike over Cross Impact?

Let's say, rather than the original 'Mark of Shadow' effect, the trigger would cause a general 'mark' debuff that changes the next skill to be an automatic critical hit. What to prefer now?

Would Grimtooth be worthless this way? And which skill would you forgo for a Cross Impact heal? Does it matter, if Cross Impact would cause a hit chance debuff rather than recovering HPs?

Would you prefer combo points and higher damage over the ability to hit 10 targets?

These kind of decisions make a character versatile... not a 683% damage Grimtooth with a 10% heal, a 50% slow and an additional combo point generation.

Only if it takes you more than 1sec to decide whether or not to choose a certain skill, the devs are getting close to a thing called 'balance'.