Baphomet is a towering horned goat-like creature that carries a Scythe . Unlike the other creatures , Baphomet seems to be some sort of a great demon / High Ranking Demon back in the Demon Realm. Like Dark Lord and Satan Morroc , they all try to enter the human realm.
However, being in the Demon realm, it is not so simple to just 'appear' in Rune Midgard. Whatever happened at Glast Heim, a very, very weak incarnation of Dark Lord managed to appear there, and now haunts the place. The same with the Baphomet in the Hidden Temple, its just a weak incarnation, not the actual full-strength version of him.

During the sign quest, Serin attempts to hold a ritual using the power of the symbol of the nine realms to summon the real Dark Lord into Rune Midgard. However, thanks to the players meddling, she ends up failing and the player manages to defeat Dark Lord long before he is able to attain his full power.

As far as baphomet, not much information is given as to how he did it, but he certainly did manage to incarnate fully in Rune Midgard some time long ago in the past. After his brief reign of terror, what soon after became the monks of the Capitolina Monastery managed to weaken him enough to seal him away. With the true baphomet sealed away, only a very small amount of his power was able to leak out, which explains why the Hidden Temple Baphomet was so much weaker then the Sealed Shrine Baphomet.

With the ressurection of Satan Morroc, It is unsure whether it was directly because of his meddling or a side effect of his resurrection, but something happened that weakened the seal on Baphomet to the point that HIS resurrection was imminent. Of course, with the whole world working hard to defend against Satan Morroc's invasion, there was no one left to help against Baphomet.

When the player arrives at the Abbey, it is really just in time (or too late, depending on who you are asking), as the monk there only asks for you to go down and strengthen the seal, not actually fight Baphomet. Of course, Baphomet breaks free, and players are forced to fight him at his full strength. Although the modern times we live in are a far cry from utopia, the ancient age was a time of constant chaos and peril in which a single day of peace was a distant dream. The Greatest of Evils rose from hell to plague the land, commanding his army to bring havoc to the human world. The people were too weak to defend themselves against these evil forces, and it was all they could do to suffer and wail to the heavens. Then, as if God suddenly answered their prayers and screams of despair, a lone Monk appeared to gather other heroes to fight the Greatest of Evils and save the world.

This band of warriors journeyed to the temple where the greatest evil resided. Half of these warriors perished on the way as they passed through the cave in which the army serving the Greatest of Evils was camped. Even when facing death, these warriors died bravely, knowing that their sacrifices would not be in vain if their comrades were victorious in the end.

Only the Monk and four of his allies were able to survive the perilous cave, and finally arrived at the temple where the greatest evil was waiting. They attacked the evil with all the might and valor they could muster, employing shrewd strategies and magnificent teamwork, but the evil was unfathomably strong and would not fall easily. The warriors couldn't withstand the evil's onslaught indefinitely, and on the brink of defeat, they were forced to use their last resort to defeat him: they burned up their lives to create five Confinement Pentacles to seal away the evil.

"Grrr! You may have succeeded in banishing me for now, but eventually, I shall destroy your world! I, Baphomet, the Greatest of Evils, will return."

Baphomet's last cry echoed throughout the world. This was the first time that humanity had ever heard its name.

The five warriors brought peace to the world at the cost of their lives, but no one believed that it would last forever. Only the power of the Pentacles was keeping Baphomet out of the human world, and if the pentacles' power was weakened, then nothing could stop Baphomet from returning.

In anticipation of Baphomet's imminent resurrection, the people built an abbey near the temple to pay tribute to the Monk that had led the five warriors that defeated Baphomet. Today, many holy men and women train there to discipline their minds and bodies and ultimately become Monks.

All things made by man eventually crumble to dust, and the Confinement Pentacles aren't exempt from the rule. As time crawled on, their power slowly grew weaker. The caretakers of the abbey sense the pentacles' waning power and know that it is only a matter of time until Baphomet breaks free. Desperate to stop Baphomet's resurrection, the abbey is recruiting warriors from all over the continent. The time to battle Baphomet has come once again.

Baphomet in Ragnarok the Animation 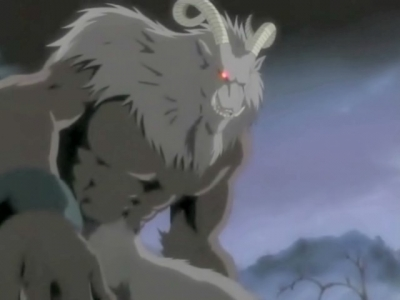 Baphomet , a large goat like creature that is the first to best the entire group of protagonists, possessing immense power, but obviously not fighting to the fullest in his fights (and often toying with his opponents). Though considered evil at first, he shows mercy by sparing the group and then respect when Judia rescues his son. It seems the Baphomet was one the greatest beings preventing Dark Lord's revitalization, though he never directly interferes until the end. It is unknown whether or not Baphomet is stronger than the Dark Lord. At one point in the series it is revealed that Baphomet is concerned for the "balance of good and evil" which could explain why he opposes Dark Lord while being the evil himself. His weapon is a large hammer in the anime, while in the game he uses a purple scythe. Baphomet is a supposed pagan deity. Baphomet, the symbol of the satanic goat, usually portrayed as a half human, half goat figure, or a goat head. It is often misinterpreted as a symbol of witch-craft in general. It is used by Satanists, but is not used by neo-pagan witches who do not worship the devil.

In the middle ages the Baphomet was believed to be an idol, represented by a human skull, a stuffed humans head or a metal or wooden human head with curly black hair. The idol was said to be worshipped by the Order of Knights Templar as the source of fertility and wealth. In 1307 King Phillip IV of France accused the Order of the Knights Templar of heresy, homosexuality and among other things, worshipping this idol and anointing it with the fat of murdered children. However, only 12 of the 231 knights interrogated by the church admitted worshipping or having knowledge of the Baphomet. Novices said they had been instructed to worship the idol as their god and savior, and their descriptions of it varied: it had up to three heards and up to four feet; it was made of either wood or metal, or was a painting, sometimes it was a gift.

In 1818 a number of idols called heads of Baphomet were discovered among forgotten antiquities of the imperial museum of Vienna. They were said to be replicas of the Gnostic divinity, Mete, or "Wisdom."

Perhaps the best-known representation of Baphomet is the drawing by the 19th century French magician, Eliphas Levi, called "The Baphomet of Mendes." Levi combined elements of the tarot devil card and the he-goat worshipped in antiquity in Mendes, Egypt, which was said to fornicate with its women followers ( as the church claimed the devil did with witches). Levi's Baphomet has a human trunk with rounded, female breasts, a caduceus in the midriff, human arms and hands, cloven feet, wings and a goat's head with a pentagram in the forehead and a torch on top of the skull between the horns. The attributes, Levi said, represented the sum total of the universe - intelligence, the four elements, divine revelation, sex and motherhood and sin and redemption. When you killed Baphomet , it may drop items (the % means the drop chance or rate):

Endow a weapon with damage that will splash 9 cells around the character with each attack.
HIT - 10

Really nice Lore, also the comic at the end is pretty funny

XD Thanks , i will do my best in the future