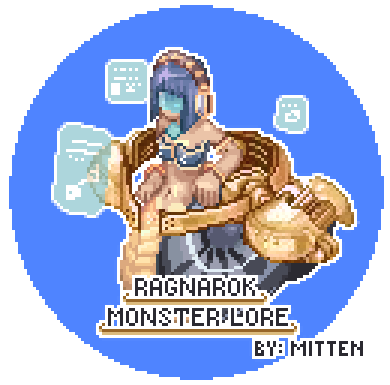 Alice is a maid typed robot that has been taking charge of miscellaneous trifles in castles or mansion. Cleaning is her priority of daily life, however she shows no mercy to intruders and attacks them driving a steel broom.

Alice is dressed like a french maid , but instead of a blue white afternoon uniform , she has a blue and white uniform. She always carries a steel broom (that looks like a wooden broom) . Alice was made long ago way before Prontera was made the Capitol. It is said that a Sage made her and her program has been running ever since.
Alice technology seems to way ahead of her time. It is only untill recent , that anyone are capable to match her technology.

It is safe to say that Alice was built to match a normal human with her physical appearance and emotion. Although she is too obssesed with cleaning the castles and mansion that she was assign to. Despite her soft appearance and no battle drive built in to her, she is still capable of attacking those who might want to harm her. When deafeated or beaten down , she will cry. This shows that she has some sort of emotion built in to her, like the recent Generation 3 Robot that was built by Kiel Hyre Foundation. She can also react like normal human being . Most of the time she will ignore the passer by because she is too busy cleaning.

Alice loves animal. She even have a Wild Rose as her pet. The Wild Rose can be seen following her around , whenever she is cleaning.

Her first appearance was in Glast Heim which was destroyed long ago , but she is still running and working perfectly (unfortunatly for her , the demons and the monsters keep on making a mess of the place).

When doing Kiel Hyre Quest, she can be seen cleaning the Robot Factory along with her sister like robot Aliza. Aliza seems to be the newer version of Alice , built by the Kiel Hyre Foundation. I have an Alice pet, and I love her so much.

THE ONLY near-PERSON (calling monster is meany to her) THAT I WILL NEVER ABLE TO KILL.

What's the story behind the White Potions as her food? It's pretty high maintenance for a pet.

Probably as her battery fluid? O,O