Beholder a creature that dwells in Rachel. It resembles a floating orb of flesh with a huge single central eye, pair of wings , long pointy tail and a pair of short useless legs.

Beholder is an extraterritorial creature that somehow end up in Rachel. Somehow there is only a few Beholder in Racher. Usually Beholders come in a large pack or swarm. A beholder's eyes possess a different magical ability; the main eye projects have an anti-magical cone ability and able to cast powerful spells.

There actually is a community written event quest we did for Rachel that was all about a Beholder who falls in love with a human. http://www.playragna...aspx?id=172&p=5

This is the very cute illustration of the Beholder created by Allysia: 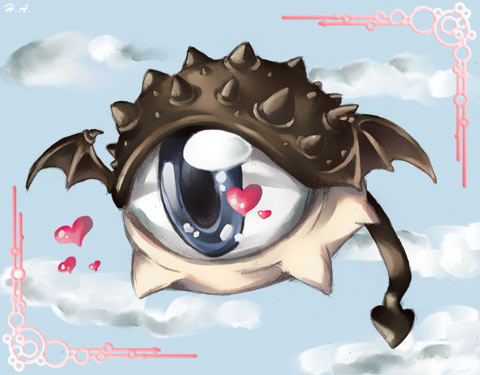 The source of inspiration for the beholder is definitely from the creature of the same name in Dungeons and Dragons, appearing in the mid 1970s.

Hey thanks Oda! I will put that in the post!
Yeah , the original design of beholder actually came from D&D.