21 replies to this topic

Aloha folks! This is automatically copied to the forums from the blog. Please use this forum post to ask questions about the game!

We’ll be on Classic Jawaii for this week’s hangout. The soundtrack of this week’s Tiki Tuesday is the excellent Stereoexotique by the neo Exotica band The Tikiyaki Orchestra. 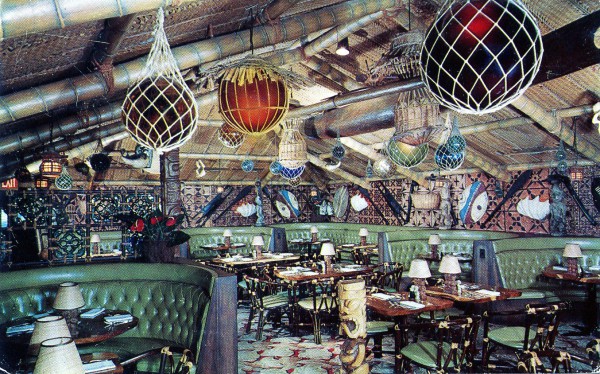 Today I’ll be talking a little bit about Victor “Trader Vic” Bergeron jr. Along with his contemporary (and chief competitor Don the Beachcomber) his restaurants were key embassies for the faux-Polynesian food and drink known as Tiki. Though Don was the first to adopt the Tiki theme, Vic was quick to see the appeal in a South Seas chain and quickly re-branded his Oakland BBQ place into “Trader Vic’s”. He and Don fought for years over who had been the originator of the immortal Mai Ta’i cocktail, with historians siding with Vic. At the height of the Polynesian craze in the 1960s, Trader Vic had restaurants all over the world. Vic had a knack for promotion, and fortunately wrote several books on food and drink that can be found used today. 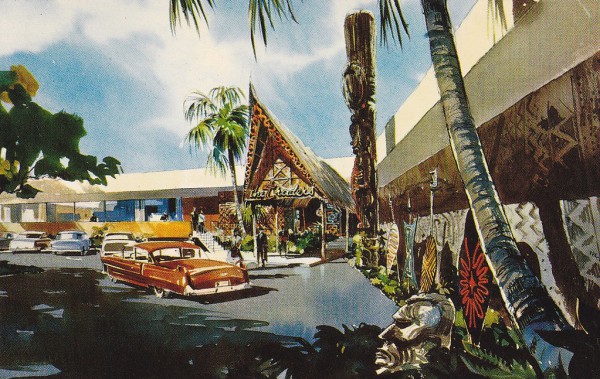 Pictured above is the (now gone) restaurant at the Beverly Hilton.

Trader Vic’s did not outlive it’s founder by long, eventually being bought up by an international concern that continues to run several locations today. The drinks are good but the food is sadly not up to snuff.

This week’s recipe comes from Trader Vic’s Pacific Island cookbook, a neat artifact from ’68 that has some very nice descriptions of his travels around the world and recipes from Tahiti to Texas. For the time, there is more of a nod to ethnic ingredient authenticity in the recipes than you’d expect.

His recipe for Baked Sweet Potatoes is probably quite similar to the one seen in the post about Bahooka.

“Another way to serve baked sweet potatoes is to split them, mash the contents with butter, crushed pineapple, rum and seasonings, then refill the shells.

Was potatoes and bake until tender. Test by squeezing. When done, cut in half lengthwise carefully. Scoop out the contents and mash thoroughly. Add butter, pineapple, orange peel, rum , brown sugar and season to taste with salt and pepper. Return to shells; swirl the tops and flick each with a dash of nutmeg. Return to oven to rehead and brown on top. Serves 6.

In response to Campitor's answer about kRO having to be the one to decide if wedding dresses could be dyed, I only asked because this fansite indicates that kRO already has an alternative wedding dress color that's different from the one we have on iRO. Could you ask kRO about it when you guys get the chance?

I'll look on Jaye's list for the date this was put in on kRO.

The elven sunglasses can't seem to be fixed here nor on kRO.

Can we have some sort of trade-in? It seems a bit unfair to not be able to enjoy an exclusive headgear.

What about items described in "Team inubashiri headhear package preview" thread? Will they be added to game, and if yes, is there any estimated time of release?

Soon, the headgears are ready, we are just working on a quest that will allow players to get them.

An elven sunglasses trade in option would be nice.

^Considering I own two stuck on accounts, forever unused, yeah it'd be nice to be able to get something for one of em.

Could u Put Enrich Hammer ig?

Enriched hammer will return, will have to think about an exchange NPC.

any news about blind bug fix from the motherland?

We are continuing to remind them about this.

Is it possible to convince Kro to make baby expanded classes?

It would be a fun thing to have more baby characters.

Any word on the ninja animation fixes being worked on?

Still no progress, we have reported it to kRO.

Will things that we can see but haven't yet to be implemented, such as homunculus accessories and viewing party member information ever actually be implemented? Thank for the answer.

what are the stats on the named Rabbit Bonnets that people got for doing the easter egg contest? mine has NO description... is it the same as the regular version only not slotted?

what are the stats on the named Rabbit Bonnets that people got for doing the easter egg contest? mine has NO description... is it the same as the regular version only not slotted?

Mine has nothing, too lol!

This must have been asked before, but let me ask again: Could you change the behavior (AI) of job change monsters so that they do not attack other classes? It's kinda annoying having to deal with the Nagas in Splendide Field 02. They should only be attacking High Wizards. Or well they can attack all mage classes but can you make them leave my crusader alone?

Or at least let them give exp. Please give us an option other than go level somewhere else.

This goes to all job change mobs, including ones in turtle dungeon and niffleheim.

Unfortunately that's something that kRO would be required to change...

Would it be at ALL possible to have a Sting Transformation scroll? Sting is one of my favorite monsters in game. And they look so cool.

Yes, we should have a request thread posted so we can make requests to kRO.

Edit: Also, whoever has been giving the support staff a good shoeing, keep it up. I did a report today they replied and concluded it in less than 20 minutes.

Glad to hear that!

I'm also curious about the Inubashiri Headgears.  So far as I'm aware only the first batch was ever released, and I'd love to see part 2 and part 3 get a release as well.

That aside, are there any plans to make the newer monster pet tames more available in game?  It seems kind of silly to keep them as special event only items or put them in lucky boxes.  I'd like to see them in game, maybe with some kind of complex "item mixing" quest like some of the other pet tames, just more complicated with these newer ones.

Will we be seeing Parade hats making a come back in a box soon maybe?

And when can you fix the usrc area on sakray because last time you opened it way too late for any real practise to happen.

Next week we will be adding stuff for USRC testing

Can you guys please increase the rate in which the black bunny band is easier to obtain?  I have tried over 180x in a row and i havent got a hat yet!!!  Please fix daylight savings bug!!!  Maybe change 23hr cooldowns to 20 hours.  Lets face it, that 3 hour less cooldown is not game breaking!!!

We will consider changing the cooldown as the event winds down.

Do you follow up on any request or report being sent to kRO? and what do they say when u follow it up?

In regards to the Elven Sunglasses question - it was an exclusive hat given out for pre-ordering the RO DS stuff through RO's website I think. A trade in for regular sunglasses would be a slap to the face.

What about items described in "Team inubashiri headhear package preview" thread? Will they be added to game, and if yes, is there any estimated time of release?

Soon, the headgears are ready, we are just working on a quest that will allow players to get them.

are all the rest of the headgears coming or just some of them??? I'm really excited!! didn't even have the motivation to level my maestro until I see this

Can you talk about the shadow gears? Is it going to be apart of the GH updates (level 160)?

Can you talk about the shadow gears? Is it going to be apart of the GH updates (level 160)?

Try posting your question in the maint thread, or wait for the next tiki thread to pop up.