34 replies to this topic

Ask your game or Weird Al related question in the thread when it goes live! 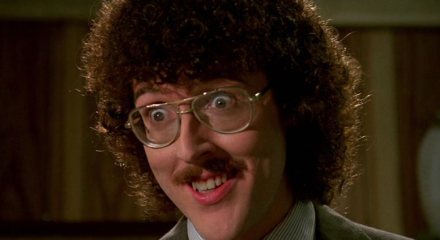 Ok, as a bit of an aside from Tiki, Trek and all that other fun stuff this week is dedicated to Mr. “Weird Al” Yankovic, perhaps one of the few artists who straight up has a ” ” in their stage name.

He’s made hit albums, had a tv show, a cult classic movie, and has survived 90% of the acts that he’s parodied. I grew up listening to Weird Al and the Beatles, my favorite albums my parents owned. For the album of the week is Weird Al’s EVEN WORSE, the parody of Michael Jackson’s seminal BAD. The album is a good mix of megahits parodies and original songs, though it’s one of the only Al records not to have a polka medley. I still have this record to this day.

Listening to Weird Al’s records and watching his feature film UHF (a classic) warped my mind and is largely responsible for my sense of humor. The image of a squashed Indiana Al fading into a grilling burger is one of the nuttiest transitions I’ve ever been privileged to watch. He’s shaved the mustache and gotten lasik surgery but in my heart he’s still the perm’d bespectacled Al from his early days.

For this week’s recipe, I will just share this. The Twinkie Weiner Sandwich invented for UHF:

Probably recommended that you cook the hot dog first, but like Weird Al himself, this is pretty much the most American thing you could eat. Now that Twinkies® have returned to the marketplace you no longer have to seek out black market Twinkie® dealers in the bad parts of town.

ive actually had a twinkie dog... i wouldnt put mustard or anything on it... but just a hotdog with a twinkie for a bun isnt really that bad...

Can you add more supply items to mail?

Yes we can add these this week.

Sure, we can look into that for future adding.

Last question: Would you guys consider turning off drops for monsters in the TIs for that week? I think it'd help with the lag and you wouldn't have a mob of angry people when you devalue yet another item.

It's something where it would be a request for a new type of map that monsters don't drop items on.

hi i just wanna ask who and what is the reason behind choosing lighthalzen field map for mid ti?

We changed the map to a larger one because having large concentrations of monsters was bogging down the TIs.

why is dancer quest harder than bios

There are ways to simplify the quest, it only tracks what spot you end up on. If someone gets stuck, the GMs can also assist with that.

In an earlier tiki thread the following was stated:

I know we Just got the woe TE and Glast Heim update; But, its been a while since kro applied the extended lvl on their servers, when are we getting that update, of course with all the stuff around it (not only the lvl thing, the rest of nightmare instances,etc)

We should be getting the level expansion and are trying to get that update around October/November.

Are we getting the whole level expansion package till Lv.175? or just the Lv.160?

The level expansion to 160 should be coming towards the end of the year, with the first part of Heroes Trail coming in before the end of the summer/early fall.

Heros' Trails part 1 is the next big update for us, and that came with a level 160 expansion.

why is dancer quest harder than bios

Its super easy if you know how to do it. If the announcer says "left, down, up, left!" just go left and ignore the first three steps. It only checks your final step.

Would you guys consider allowing

to be placeable in these two useless hotkeys? Even though the paints aren't ammos like cannonballs or arrows.

We can ask kRO about making a change to that.

Please cert 10 next lucky box.week to get offer in buying cert10 in eden.

The Night Sparrow Hat, Magician's Night Cap etc. were available in the cash shop for a long time and people were able to stock / +9 them and whatnot.

The plan for the remainder of the hats is some (lenghty) quest.

Do you have a plan to balance this issue?

Our plan to introduce these as rewards for completing player designed community quests either this week or next week.

Would it be possible to reset specific enchantment slots for the Red Beret? Something like the RWC accessory enchantment system.

Unfortunately the full reset is the only one that is possible for that particular headgear.

Would it be possible to reset specific enchantment slots for the Red Beret? Something like the RWC accessory enchantment system.

you can reset the enchants with a reset stone
what is the bonus for +9ing a red beret?

It's a surprise, says Campitor.

1. Can we put a save option back on the Archer Village Kafra? It used to be there in the past. Dunno why it was removed.

Yes. We can definitely do that.

2. Since you guys were able to remove the drop rate penalty for iRO, why can't we have the EXP penalty for higher level monsters removed as well? There would be a lot more people leveling on the world maps if they weren't punished for being able to take down something stronger than them.

Unfortunately the penalty is something that we would not be able to change on our end like what we did with Drops. We are sending up a request to kRO to ease that penalty.

3. Can you ask kRO to pick up the pace on the DirectX update that they're supposed to be working on? Players with modern computers would appreciate it if RO was finally optimized to run better on newer computers.

We have asked in the past, but if you have a more concrete date or update that we can ask them about it would help us to communicate what we want them to give us.

Could you add a kafra we can save at inside the WoE:TE realms? There is a lot of confusion accidently going in WoE1 castles and would save a lot of loading time moving between the realms.

Who is the current producer of iRO stateside? Are they forum active?

I recall it was Heimdallr, but to my knowledge he's no longer responsible for RO1.

We have two producers for RO, Holden and Campitor

UHF was a good movie

I dun care whatcha all say Why are these still here? Rachel Spotlight ended months ago. I dont mind them killing the bots.

Will they ever be removed?

Sure, we'll look at that.

We can look at expanding the limit, but maybe not as high as 95

We can consider it.

The more detail you guys can provide us with is more ammo to talk to the devs and the IT team about the actual causes of latency.

I found that when I equip an an RWC knife on the offhand of an assassin, I do not received the bonus atk given when equipped together with the non-slotted RWC ring.

when wearing the non-slotted rwc ring.

Can this be fixed to give the set bonus if the weapon is in the offhand too? Since technically I'm equipping both of them together.

If I am making some horrible misunderstanding somewhere on the atk, please correct me @_@

I found that when I equip an an RWC knife on the offhand of an assassin, I do not received the bonus atk given when equipped together with the non-slotted RWC ring.

when wearing the non-slotted rwc ring.

Can this be fixed to give the set bonus if the weapon is in the offhand too? Since technically I'm equipping both of them together.

If I am making some horrible misunderstanding somewhere on the atk, please correct me @_@

I could swear it used to work...

any news on the Kagerou/Oboro alt  colors becoming available... and what the official colors will be? if they are good youll sell ALOT of omni clothing dyes

We haven't gotten word of this yet, but it's something I'll look out for.

could you change the rule of buying shop not to include buying price limit? it is annoying to see trolls setting buy shop but they cant buy anything since their zeny limit is lower than the buy price (like buying Ori for 180k zeny case).
i found this zeny limit rule doesnt make any sense. how come you set a buy shop but you have no money to buy it?

That wouldn't be a bad thing to ask kRO about.

I could swear it used to work...

I have screenies at home of the difference in atk : o

Was wondering why ice pick on the main hand did so much less damage than on the offhand.

Consider keeping the jump event on Classic? It seems it's just started getting people into the game and the holidays are just about to start.

It's staying on classic for another week.

What will the Red Beret do on Classic?

You will find out this week?