Ok, I am mildly confused about WHAT stats to go for with my soulmaker. I had used 50/50 int and agi up till ml, then recently changed to add some vitality and higher int, lower agi. I haven't really noticed much difference either way. I keep reading about people saying full vitality, but after adding some vitality I can really say that the increased HP was absolutely abysmal. I would much rather have higher crit or int for better mattk. Why do people say full vit? I understand higher HP, but even if I dumped all my points into vit I do not see how a couple thousand HP would be better than higher heals and damage. What is the reasoning behind it? I am just rather confused about the whole SM stat builds, there seems to be a lack of information online making things a fair bit more difficult! Is it really so bad to go int/agi for an SM? Why dump full points into vitality?

Full vitality is kinda a waste in my opinion .-.

People usually say to go full VIT because we're squishy and so we can survive longer, but since we have cure I don't really think it matters.

As long as we have spinels and pots we good o3o/

INT and AGI are amazing for damage :3

I'm not a SM, but this works as a sweeping statement: Stat builds have never really been overly important in RO2 (excluding INT that Swordsman needs). You rarely notice an impact unless you play Swordsman classes or perhaps a full VIT BM.

Why do people say full vit? What is the reasoning behind it?
Because people tend to believe the end game goal is PVP and in PVP your SM wants to have enough HP to survive getting killed in one shot. That's the only way your Cure can activate, thus increasing your chance of survival. 325 Vit dumped into VIT is merely 3900 HP, a bit more if you include VIP and other buffs, but it's significant enough against some classes. VIT is worth investing in because its bonuses do not scale off like AGI (Crit) and because it's a lot more noticeable than INT(M. Atk).

Is it really so bad to go int/agi for an SM?
Won't be bad, but won't necessarily be good. Ever since the AOV patch changed most of the formulas to have diminishing returns, most players tend to plateau off with the same stats with very low marginal increases gained from stat builds. Since then, stats have played a very minor role in damage compared to pre-AOV and you tend to have tons from various sources such as gears, titles, and cards. This makes your stat build slightly irrelevant and this is why you barely notice a difference either way. At the end of the day, it's simple, don't stress over your stat build.

if you PVP VIT is an absolute necessity

in duel it isnt much

in Collo the boost should be obvious

4k HP in collo is a huge boost, cause people got low dps there

although 1 shot is still possible, it should be harder for them that 4k would have grant you enough time to do something

in WoE to survive Cata you must invest in vit

either that buy High end PC and live in NA(SEA players got .5sec delay in movement)

In PVE dpends on your use

if you want to have an easier time go vit

if you want to kill abit faster go int

full VIT is the way to go for all rounder... i mean... many dunno about hard boss in AS (80% of the population havent even tried Assassin's Sacntum)

SM with 20k-30k  HP if you go in AS... they easily get one shotted or 2shotted by the Boss AoE (Jeff/eremes/accel)

so i think in terms of performance boost... id rather go VIT (though for now Game isssss toooooo eaaaaassssssyyyyyy if you dont go PVP or Assasins Sanctum)

now.... here comes Forgotten Payon where i heard Bosses are way stronger than AS bosses.... good luck with your Cure then (i heard its as strong as Ceres in Morroc WoE... that plant thing do 40k+ AoE XD)

Most what I want to say is already mentioned, so Imma just put my 2 cents in:

On SM, full VIT is a must for PvP.  For PvE, it's a preference thing.  Unless you farm Cazar gear just go INT/AGI for more DPS for PvE. 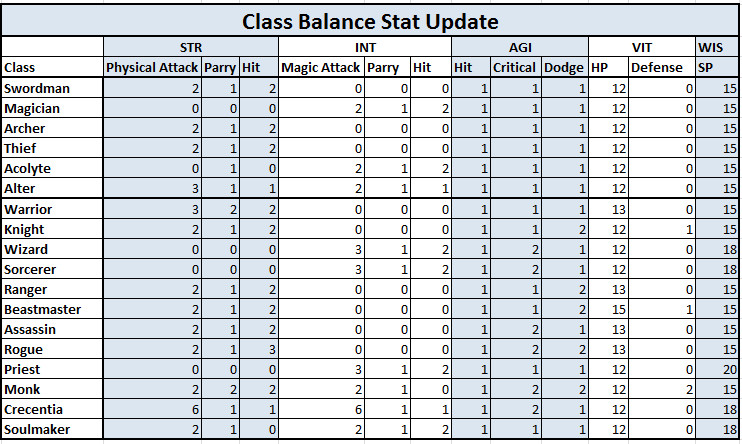 I recommend full vit.. If you have good gears, int/agi will help in dps and cure but even in pve, HP can still mean survival, especially in dwu archers...

INT in SM is Good but not too much (cuz int just increase 2 matk 2 hit and 1 parry, i tell u with the doll + a good hone u can get a good ammount of matk)

VIT in SM is like every one class ( it increase ur vit and if u max the stat then u can get like 3.6k hp)

in mi opinion i prefer vit for 2 reasons:

2.- Sacrifice does matk atack + hp u loss after the sac (10% of ur max hp) and that dmge it rly helps in the dmge of sac

and for skill tree, just lvl mental breakdown transforms restoration and cure ( with those u can lvl without problems till 30 ) ah and also buffs.

I can easily agree on the first point and any other statements, but the second one doesn't realy make sense.

Even if you spend all your 325 stat points in vitality, you only get 3,900 HP. With guild buff, VIP title and a few other gimmicks, you can increase it to maybe 6,000 HP. But still, that means that Sacrifice deals only 600pts more damage... and that's only true, as long as the damage isn't cut down by defense rate or damage reduction.

On contrast, 325pts in INT increase your MATK by 650pts (without any buffs)... and the resulting physical skill effect by ~60. Due to the damage modifier of 1265% for Sacrifice, it will result in at least 800 points more damage (before defense as well).

So I wouldn't use this as an argument to go full VIT.

well nice arguments, to be honest, i was thinking aout go full int.... but now xD! at least the stat points are spended on vit xD!

FULL AGI, all the way.