15 replies to this topic

Hey there folks! This is our thread for the Dungeons and Dragonlark show that we do on Fridays with various members of the WP staff. We'd like to get more interaction with the WP community for this fun show we do and get ideas for scenarios, characters and items in the world from our players.

Dungeons and Dragons is a traditional pen-and-paper fantasy Role Playing Game where one person assumes the role of the "Dungeon Master" who tells the story and plays the roles of NPCs, enemies. The rest of the players take on roles of an adventuring party, who have to use their unique skills to survive and defeat the Dungeon Master's scenario.

The show is archived to youtube after each play session, you can find our first episode on Warpportal Weekly: DnD edition

We are playing the adventure from the Dungeons and Dragons 5th Edition Beginner's Box. We were able to defeat the goblin cave and are fighting against the Red Brand gangsters that have taken over Fandalvar. Our ultimate goal is to find Wave Echo Cave and the missing Gundren Rockseeker.

We are totally heroes.

If you're wanting a modern d20 system, you may want to try Pathfinder as a D&D alternative.

I think it would be really awesome to try Pathfinder after we finish the current D&D campaign! I may have bought a bunch of Pathfinder books on a recent humble bundle sale so I am somewhat prepared....

Alas we shall live on tortured by the mystery of our character's fate. 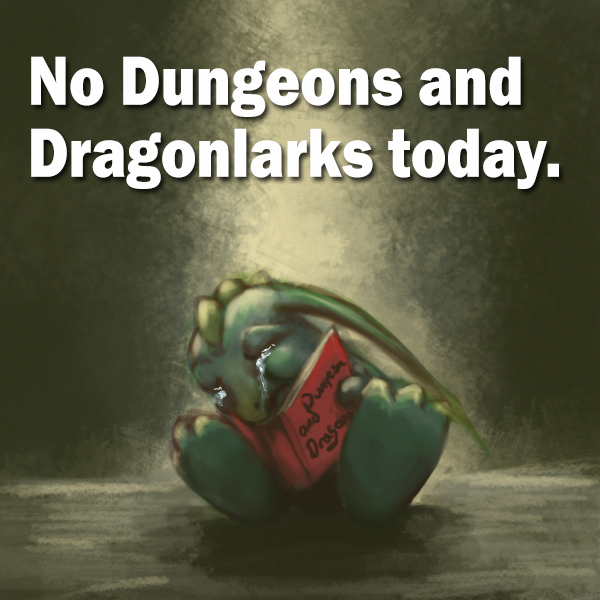 I think it would be really awesome to try Pathfinder after we finish the current D&D campaign! I may have bought a bunch of Pathfinder books on a recent humble bundle sale so I am somewhat prepared....

I also have a bunch of books.  So does Jon!

Today's episode of Make Stuff Monday is being taken over by CM Varitas, starting at 1PM PDT on twitch.tv/warpportal! She is going to be drawing characters from our weekly episode of Dungeons and Dragonlarks!

This week we're going to pre-record and cut the video for D&D with an intro!

We did a pre-record of last week's show to do a little more editing and improvements to the video (like music). Just got it uploaded yesterday!

Broadcasting episode 13 at twitch.tv/warpportal at 5!

We will be broadcasting episode 14 of Dungeons and Dragonlarks on twitch.tv/warpportal at 5PM PDT!

Our latest Dungeons and Dragonlarks video is up at youtube! We had a lot of fun with this one:

This week's episode is up!