They said Warrior's Grave 's difficulty is lower than they expected, since some classes with proper gears can solo it. (They have increased mobs HP by around 70% before, in the purpose of party leveling. But obviously it didn't work at all.) So they'll re-adjust Warrior's Grave feature in Sakray tomorrow. (To forces the players for playing with party)

Teleport skill and every type of Fly Wing will be disabled in dungeon.

And the dead bodies will appear randomly throughout the map, spawning maggots when players enter near it.

In addition, Fiber lock and Ice Wall will be disabled too. 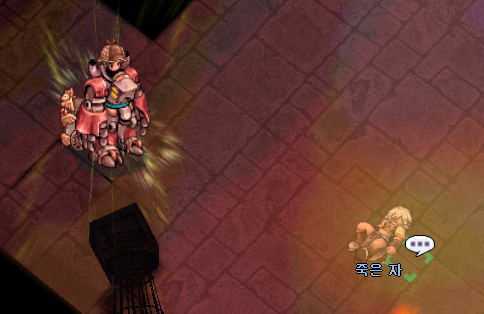 beware the dead ones!

normal and boss mobs HP is slightly increased. (around 80% and won't apply to MVP).

Their attack speed is increased. Their skills casting time is reduced.

Some of their skills are changed or added. And lower the frequency to use Max Pain.

Mobs will use certain skills when they're immobilized or being rude attack.

3. New NPC for sending you to craft and enchant NPC.

Since teleportation is disabled in dungeon. NPC that will send you directly to craft and enchant NPCs in dungeon will be added, with the fee of Evil Mind Debris 20 ea and 15 million zeny.

MVPs will no longer spawn normally. Instead, Players must kill certain amount of normal and boss mobs to summon MVP. And when MVP is killed, there has some delay before can summon MVP again.

When MVP is summoned, An announcement will appears to all players in the map.

Level requirement for entering Warrior's Grave and using Evil mind Debris will be limited to 100 or higher.

To compensate such adjustment. EXP and drop penalty of normal mobs will be disabled.

Increase the drop chance of items from normal mobs by 2 to 3 times.

Also, the debris has a chance to drops in pair.

To help players fight through the mobs. Several devices are added around the map. They will give you various beneficial effects when players enter near them.  (This reminds me about 'Shrine' in Diablo games.)

Difficulty lower than expected, ppl soloing....
I WONDER WHY

I honestly don't see people going there much if the rewards aren't amazing.

that poring fedora with a beret tho <3

Hope we don't get this patch at the same time as the the warrior's grave itself. Socializing is not really my forte kek

I honestly don't see people going there much if the rewards aren't amazing.

Assuming they're vendable I think it might be profitable to farm the enchant materials (like temporal crystal / coagulated spell) but teleport being disabled will make it harder to solo farm.

I'm sure people will still solo it though.

I'll still use pois on smoke and let them die and grab the items after their dead. No biggie

mobs are boss protocol, aka immune to any status ailment

no matter how tedious it is, people will find a way to solo it somehow. blame it for super OP endgame gears AKA bio5 hats which makes everything is fragile like tissue paper.

inb4 megs and bio5 hats are disabled inside the dungeon

I'll still use pois on smoke and let them die and grab the items after their dead. No biggie

mobs are boss protocol, aka immune to any status ailment

You can still kill them within seconds with RC+CRS when using Old Bone Circlet, so no biggie.

I hope this garbage doesn't come to iRO with the update itself.

I hope it does.
Rewarding party play instead of solo ez stuff and the drop rates are being increased as well. Oh and the mvp farm for debris isnt an issue anymore.

Plans for Bio Lab 5
The Bio5 changes haven't left kRO's Sakray yet so we can't begin to request them.

Inside Warrior's Grave after adjustment.

KRO players are tenacious. They still try to solo. lol

PS. 1. red cells that often appear around mobs are the AoE of skills they are casting.

PS. 2. enchant, craft and exchange NPCs are on the top room of the map.

Wow, its SOO MUCH MORE NO DIFICULT

You can't teleport but you can back slide. Good job Gravity LOL.

Good grief teleport will be disabled there, that's actually the most abusive skill being used by Super Robots to cheat death

Looks like they started to team up kek. Camping pulling low ti thing since wing is disabled :x

actually it is similar to prerenewal bio3 party.

Notice the party gets wiped at the end lul

I like how they think, "oh, it needs to be harder let's increase monsters HP".  It's like they don't know there are other ways to make monsters/instances more challenging.