2. What Is My Classes Job In BSQ

So lets take this as an example-

You were late for BSQ and see these two teams 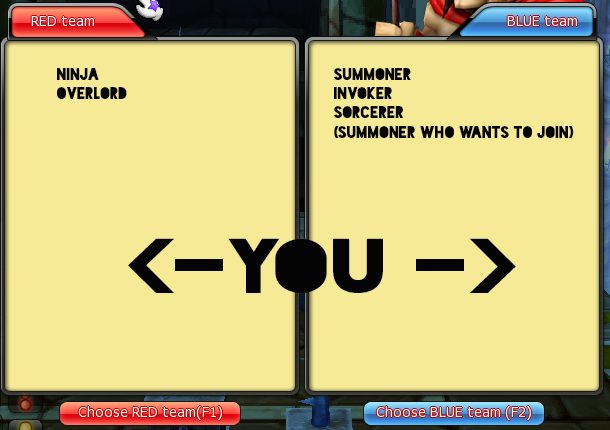 Which team do you join now in?

Depends on what class you play and how geared you are!

Join the Red Team if you are a stacked:

Join the Blue Team if you are unstacked/ unskilled or a Human Class with low Crowd Control like:

What will happen if you join as an ungeared/ unskilled the RED team?

-> You unbalanced the BSQ even more because now another Summoner will join the BLUE team and your teammates will be probably quitting sooner or later.

But if you Line-Up in the BLUE Team instead you (as an ungeared/ unskilled player) will at least prevent that one more OP char joins BLUE.

So basically rather wait a minute than unbalancing the whole game even more.

Basically everyones Job is to:

Ofc you cant do both things at the same time, so if you see that your teams Flagholder gets attacked from a mob of 3 or more opponents, then you go and hurry to help your teammate out! This can be done regardless of the gear you have.

You can do following with your class to defend your teams Flagholder:

ATTACK AND CATCH THE OPPONENTS FLAGHOLDER

Basically just try to catch the Flagholder. Sounds easy, will be hard.

Probably the easiest way is to catch the Flagholder with an Invoker who uses Barbarian.

NOTE: any Invoker can do this. Regardless if you are geared or not.

How to get Flags back:

How to kill the Flag Holder:

Not much to say:

Dying is easy. But dying like a pro is hard.

If you see that you are low on health follow these steps:

thats it. Dont rush with your flags into the opponent team. Stay close to your teammates, wait for the opponent to come, place some Tesla/ Traps, Magnet, whatever which wont let the enemy pick up your flags easily. Go suicide like get hit by the opponents Summoners Helix Shot on purpose.

-> Now your Tanky Teammate can pick up the flags and your team will be able to continue to gather points.

People who play alot or play together know this stuff, which will decide the Game more or less.

You can check YouTube videos of PvPer to see how they do BSQ- this might help you also.

The whole guide for me.

There's nothing much to do than what qwewe stated. The rest is pretty much optionnal.

Back to Newbie Guides