91 replies to this topic

What should i use for wep/shoes to prepare for kangero?

It is a battle soul linker?

Let's revive this topic at least a little! so tell me, why is it no-one uses Shotguns? They must be afraid of the power.

I guess i'll be the first to post my kagerou ^.^

Woah, lend me a helping hand! 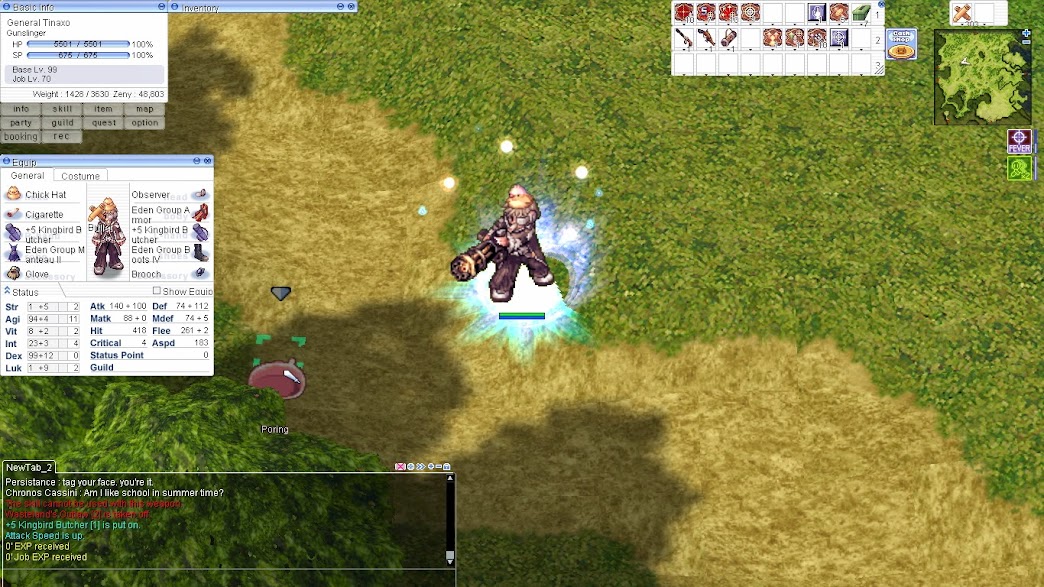 My 99/70 Slinger. ASPD needs work, but I love my Gatling Guns too much to switch Came back to iRO and finally finished that damn Extended Quest: My Oboro, Chimamire. She's loooooong since maxed at 150/50 and happily murders Suras all the live-long day, but this is the best group shot I could find in my screenies (even if it isn't maxed~).

The boxhead is Okami Maru xD Hi, I'am from bRO, but i played in Blue Lotus Guild last year^^

MvPs i have done from bRO:

And a video that i make, showing how to MvP:

Hope that you enjoy it!

Edit.: I will try Baphomet, Nidhoog's Shadow, Fallen Bishop, Kiel and Detardeurus, if i do it, i will post here again

Believe me, as i said, i played in iRO server last year.  I know you don't like people that show or say to new players to use equipments that cost billions of zeny.

bRO is very similar to iRO, and everyone can do this in iRO, its possible even wearing cheapst equipments like Mikatsuki, Grimmtooh, and armors with Bathory, Pasana and this kind of cards.

And new players in iRO have an easy begin than bRO(@thor) new players, because BR players just recruit OH classes in PTs, itens cost tons of zenys, we don't have TI quests, and to a Ninpou is much more easy to get IC in iRO than bRO.

Edit.: Sorry to change the scene of the topic

^^ I enjoyed seeing those screenies..

Ready to be a Rebellion! xD

I'd like to thank everyone who let me leech. Back to Expanded Classes