Is this the management's response to inflated prices in the market? so that they can deflate?
The zeny reward before was of great help for beginners and low level characters though.
Now if the info @ irowiki is correct, a low level character has to defeat a non existent level 375 monster 150x just to earn the previous zeny reward of 37500.

The current zenny reward at higher levels won't even cover the cost of supplies consumed to defeat the monsters.
If their purpose was to make it harder for beginners to begin they could have just remove the bounty boards.

You get an eden merit badge for every 4 missions you complete. Any 4 missions, no longer has to be a full set of missions entirely.

Although I say that obtaining eden merit badges is easier and a magical reset stone can yield more zeny quicker. Although....even if that, the cost of consumables wouldn't exactly be covered by the (Monster Level x 100) worth of zeny.

It's not to say "we get easier EMBs, give us more zeny" but rather a "It's great that the boards were rebalanced to obtain more EMBs as we level but the cost of supplies won't be covered with this." Not to mention that getting that sweet early zeny in the form of 37,500z per mission (along with the people buying items from certain mobs)  allow us to get to 3~5m zeny to purchase cards such as Hell Poodle or Snowier (since it is now possible to go into Jawaii thanks to Marriage Covenant being available in-game now) Specially more with marriage covenants being available in-game it is a huge help to anyone and would encourage them to play with their friends and bring people.

Later on down the road once they reach rebirth and get closer to 3rd class they will need money for rebirth then they will also be able to purchase important items such as anti-small/medium/large cards and they end up costing around 5m~10m zeny as well as other things such as elemental armors.

The zeny will be there, but newbies coming in will at least have zeny to approach the game.

Furthermore, people complain that it's so grindy and everything is so expensive. Making things difficult, lack of zeny for utility gears/supplies will turn people off. One of the things I have been told from people watching my stream is: "iRO is too grindy, the levels keep me away." Some others say "It is hard to make zeny" (although there's a zeny progression but that's for another time, we are focusing on the newbies and first timers here). 37,500 zeny is very appealing. 25,000 z too, even, but the main idea here is that reducing zeny significantly for newbies, which is a HUGE incentive to do Bounty Boards, is a turn off, I mean, even for me, it makes me wonder if people will struggle and just not stay knowing this was changed or it doesn't yield enough for supplies.

Was there a reason to reduce the amount of zeny earned from Bounty Boards?

I don't think the changes made it easier to obtain EMBs from BB's...

I don't think the changes made it easier to obtain EMBs from BB's...

For the most part, I thought that Payon bounty boards were the easy ones for the EMB; however, it required me to go to multiple places and farm different monsters which although is not bad, I couldn't just focus on one. I can agree it might have not made it easier for the early levels, but in the later levels, you get boards with 5 different monsters, most in different areas, some not as easily accessible such as Thanatos Tower Floor 3 and on, Some dealt with dungeon access quests such as Brasilis, which although easy, not everyone is gonna wanna go to different maps and just focus on the same monsters. Geffenia on the other hand, is a very long quest to complete 2 missions or so if I recall correctly from the Geffen Boards.

Take brasilis for example, you got most of the monsters on one map and there's many of them. You can repeatedly do these missions and finish them all almost at the same time without having to go to another map. Every 4 missions, an EMB and you're grinding a very good spot for your level.

A counterexample is the Yellow and Red Novus maps, which I agree may have been easier, but that is the exception to this rule because it is the only board with just 2 missions and the monsters are in the same map.

I may have overlooked something but I know for a fact that if I could choose to level up in payon from 1-20 on just spores because of the strawberries and not have to change maps to willows or boas, I would gladly stay there and do the board 4 times and get more from it than just doing 3 boards and only benefitting from 2 (I use spores because the map is more accessible, such as others maps may also be.)

Additionally, Prontera boards 1-20 had quite a few monsters in them in the early levels, so completing all of those missions would take longer and you'd get only 1 EMB for 7 missions, now (if the changes are applicable) you end up with 1 EMB and 3/4 missions completed for the next one.

This is just my observations based on experience and having completed different boards with different characters when I first began on iRO. 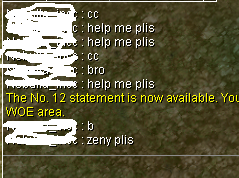 this break my heart...

If their purpose was to make it harder for beginners to begin they could have just remove the bounty boards.

As far as I know the bounty boards were ADDED IN to make it easier to level, other OFFICIAL servers don't have this

As far as I know the bounty boards were ADDED IN to make it easier to level, other OFFICIAL servers don't have this

So level up fast and be stuck up with the same boring Eden Group Weapons and not enough working capital to rebirth, to get potions/restorative items and decent gears? Not all have money though and OCPs are for people who think money can compensate for their lack of skill and party play.

I'd like to think that the previous zeny reward is for FREE PLAYERS and it's one of warp portals' way of ensuring that FREE PLAYERS stay so that PREMIUM/PAYING players have people to play with. Remove such a feature or a bonus for FREE PLAYERS will negatively affect PREMIUM PLAYERS.

The zeny reward has never been significant enough to consider it any more than just a token of apreciation. If you desperately need money, you can very well loot monstets for their items, wich always gave way more money than bounty board rewards.

ps; Stems are a 100% drop from mandragoras, wich are laughably easy to kill even to a fresh new player, and ppl buy them in buy shops for 2~3k each. Pretty decent consistent money to get started.

I was informed the Zeny adjustment is intended, it now scales with the level of the hunted mobs.

Keep in mind this is an ongoing process so things may be added/adjusted as the staff update the board system.

Although there is a market, it’s not like every single individual knows there’s a market available. The zeny provided from the bounty boards served as training wheels to get people into zeny.

Though while writing this it occurred to me. Is this to prevent the zeny being made from bots who only go around killing monsters in a field and submitting boards? Or what is this lower zeny amount in response to? Would be nice to hear from staff since we haven’t heard much in a while. (Dialogue would be nice, that’s what I’m trying to get at)

Do you even have data on how much zeny bounty board quests generates? Pretty sure it doesn't contribute significantly as compared to people quitting and then dumping massive zeny into circulation.

You may not get an answer here, also bumping is really suited for a market topic.

I'd suggest asking in the FAQ thread, unless it was already posted there. The thread will be responded to soon seeing that it is pending for answers already, once Campitor is back in the office that is.