I don't know about hidden temple, but Ant Hell entrances are in Morroc Field 04 and 15, as they were originally. (E>E>E>N and S>E>E from morroc respectively).

it won't let me log in my username is: [Removed]

Please don't post your ID, this is a public forums.

Provide more information, what error message are you getting? Saying won't let me log is to vague.

Login to your WP account, make sure of the account ID and that's a Ragnarok Transcendence account. Also that you are using the correct client. If you require further assistance please create a new topic here and I will help

, your issue is not relevant to this thread.

Don't know if intended but blacksmith crafted weapon's dont come with enchantments, even when the blacksmith is at rank 1~5 and even the lower level weapons

I checked with the staff; This is intended and not a bug, maybe in future they will come with options.

Name of item/skill/NPC with issue: Pet Egg (little isis, the evolution)
Location (if applicable):
Type of Issue (choose):  Bug
Describe the issue: i did evolved isis to her next evolution, but i didnt got her egg back, its gone !

Name of item/skill/NPC with issue: Refine UI
Type of Issue (choose): Crash
Describe the issue: When attempting to refine, if Sound Effects are enabled, it will throw a series of errors ("Unable to find ___.wav"). After clicking through all the errors, the game is stuck on a black screen. Can be avoided by turning off Sound Effects. You are able to hear the sound effects from others refining no problem.
​Screenshots/replay of issue (if applicable):
Spoiler 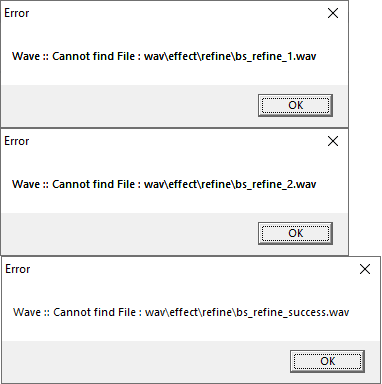 Name of item/skill/NPC with issue: Refine UI
Type of Issue (choose): Visual errors
Describe the issue: Buttons for the Refine UI aren't fully there, causing some of the text to be illegible. Specifically, the "Try Again" and "Back" buttons shown after a refine are glitched out. Screenshots below.
​Screenshots/replay of issue (if applicable):
Spoiler 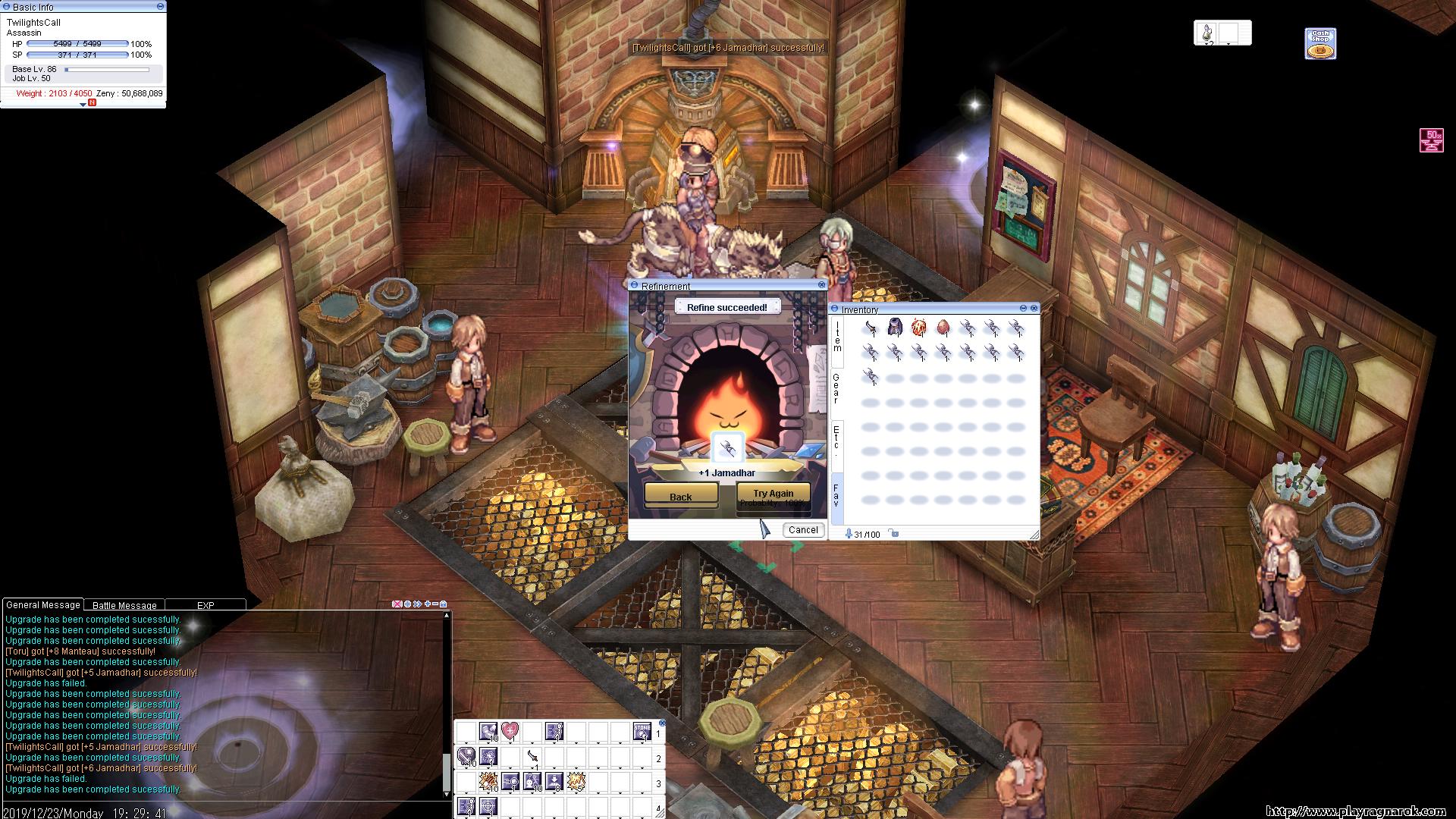 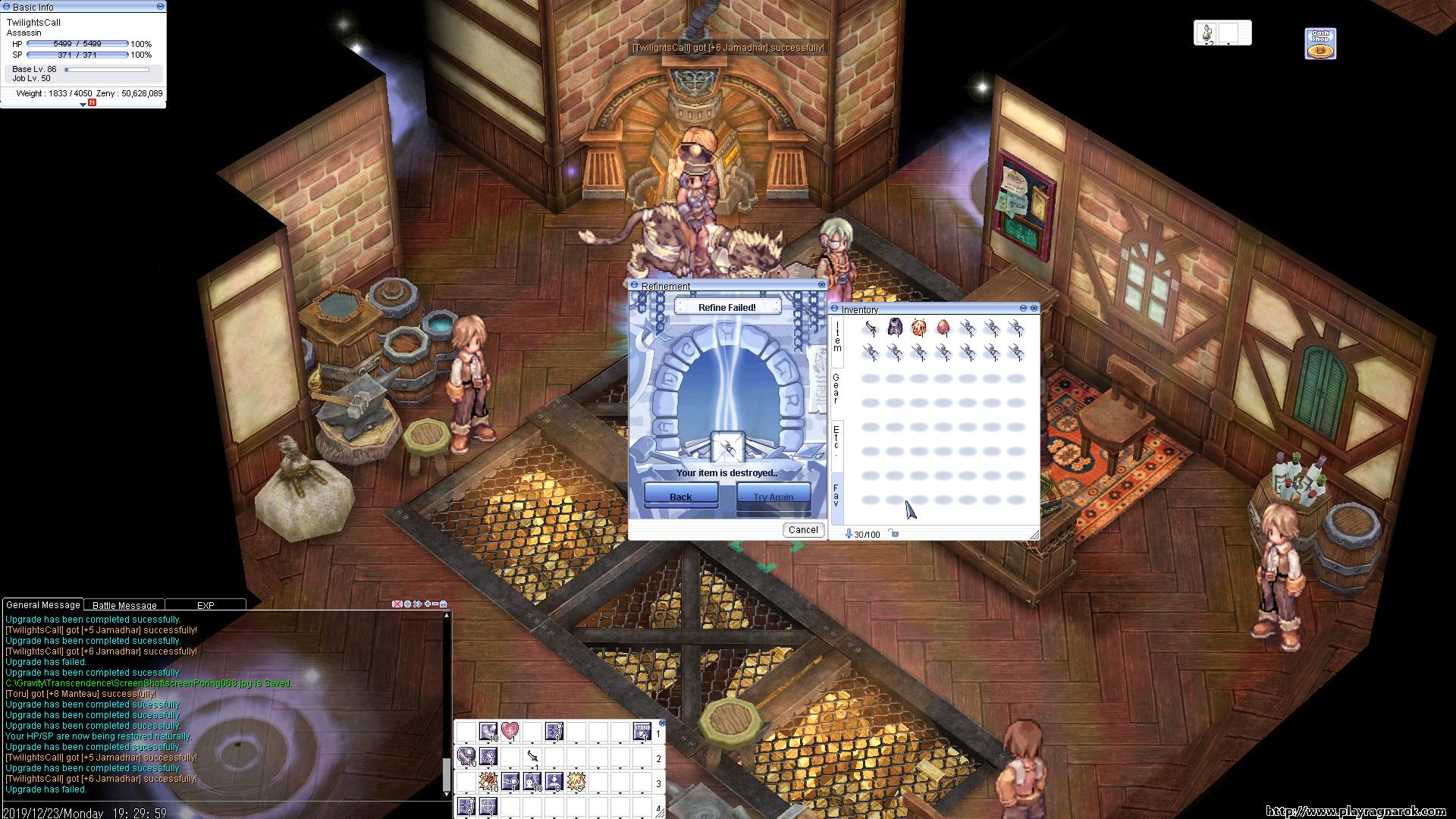 Yes, you can... try waiting 0.5 seconds before using Asura. If you use instantly it will fail.

Yes, you can... try waiting 0.5 seconds before using Asura. If you use instantly it will fail.

True, I tested it now and you're right but isn't this a bug?

Maybe, or maybe a way to nerf monks even more. After today's update I really don't understand the staff.

Name of item/skill/NPC with issue: Optioned Weapons
Type of Issue (choose): Options not appearing
Describe the issue: When stealing a weapon that normally drops with options, the stolen weapon will not have any options. (Tested with an Axe [3] stolen from a Minorus in Sphinx 4)

Performance Issues (animation):
Angeling
Hodremlin
Grand Peco
Leaf Lunatic
Ancient Mummy
Mummy
Nine Tails
Evil Nymph (one animation does not work. The juggling and bending cloth on back one does)
Gremlin
Metaller
Eggring
Mastering
Dullahan (eating fish one works, but only from one viewpoint.)
Novice Poring
Yao Jun
Am Mut
Cat O' Nine Tails
Hammer Goblin (spinning around and apologizing work. just one doesn't work)
Flail Goblin (spinning and waving hands work. just one doesn't work)
Diabolic (flame one and flame/burnt one works. just one doesn't work)
Choco (flipping off one and jumping eating banana one only works from two viewpoints: left front and right front. attacking one only has one viewpoint (behind left))

Name of item/skill/NPC with issue: Optioned Weapons
Type of Issue (choose): Options not appearing
Describe the issue: When stealing a weapon that normally drops with options, the stolen weapon will not have any options.

Do you have the name of mob you stolen the weapon from? Need to check, because the staff are working on the weapons in waves.

I don't know if anyone have reported, but:

Name of item/skill/NPC with issue: Dye Maker JavaDullihan
Location (if applicable): morocc_in,146,99
Type of Issue (choose): Missing
Describe the issue: He was missing at the in, so we can't make dyestuff
​Screenshots/replay of issue (if applicable):

Type of Issue (choose): Sound effects
Describe the issue: Error messages "Cannot find file..." pop up when refining weapons. Seems to be the sound effect files for refinement and success.

Edit: Seems to be happening with other Refine NPCs too.

Do you have the name of mob you stolen the weapon from? Need to check, because the staff are working on the weapons in waves.

The weapon was an Axe [3] stolen from a Minorus

TwilightsCall, so checking with the staff, the options seem to happen on item drop and not when stolen. It is unknown if this behavior is intended or not.

It will be checked with the developers.

I remember seeing a kRO Patch Note saying they fixed it so stolen gear has options, but I guess it might have been intended and then they changed their mind but I always thought it was a bug. Either way, worth considering how they want it to work for this server.

i saw hunters having a falcon i go to where the job change to hunter and there is no falcon rent npc , where did they get the falcon ?

i saw hunters having a falcon i go to where the job change to hunter and there is no falcon rent npc , where did they get the falcon ?

got it thank you

Name of item/skill/NPC with issue: vending with street stall part time expert voucher
Location (if applicable): Prontera around 150, 185
Type of Issue (choose): Can't vend after two tries in a non-vending area.
Describe the issue: I tried to vend 5 items, clicking yes that I wanted to vend there. I get a notification in chat that the area is bad, but don't notice. So I click to vend again in same spot, and yes that I want that location. This time the error is there again and my vend window disappears. So I try clicking on the street stall item to try vending in a new spot. It says I am already vending when I am clearly not. Logging onto another character and back does not help.

Type of Issue (choose): Wrong animation and health bar bug.
Describe the issue: I'm playing as a monk. If you kill a monster and it respawns near you, punch it and it will fake its own death. It will come back and hit you and sometimes it becomes invisible and you start punching the air.

This might happen with other mobs, but I found it mostly with Brilight and Sohee.  I think I found it once at lower levels (as an acolyte), but I didn't replicate it as much because of the fast leveling.

I tried to "print screen" it, but the re-spawn stopped bugging after I stopped punching it for a little bit (because of the screenshot) and I ran out of potions shortly after.
​Screenshots/replay of issue (if applicable):

I also found the usual disappearing evolving pet with Isis (https://imge.to/i/v0CzRV) and relocated mobs (like Phendark absence from Glast Heim), but I think the first bug wasn't reported yet.