40 replies to this topic

Putting up sticky threads to better organize the bug reports/feedback we're getting. For these, let's keep this simple.

Oda: Let's stick to patch based issues for the time being.

^Wondering about this too, Spare Cards are still overly white.

Just went out to test my sniper and he's got an interesting sprite glitch.
While fighting or in his battle stance, the layering between his head a body gets a little off.

Might be hard to see, but his head layers behind the body.

Edted: I went and checked my Stalker and Maestro, the both of them have this head glitch as well. :/

Just went out to test my sniper and he's got an interesting sprite glitch.
While fighting or in his battle stance, the layering between his head a body gets a little off.

Might be hard to see, but his head layers behind the body.

Edted: I went and checked my Stalker and Maestro, the both of them have this head glitch as well. :/

most, if not all classes have this glitch

I don't know if this was an issue before the patch or not. I don't remember coming across this, so I'll post it anyway. Seems that Sura's getting decapitated after performing Guillotine Fist.

Actually Suras get decapitated after casting all skills.

This was on Sakray. My computer's region is set to Japanese, hence the file names come out all funny like that. =\ Both times, the red-haired male ranger with the Incubus Horns was walking through my screen. Screenshot's file date says it was around December 17 at 12:30 AM EDT when it happened. Can't tell if it was something new from the Bifrost update or what.

<Oda: I'd strongly recommend a full reinstall to a new folder to see if that clears the missing data issue you're running into. >

now on alchemist in turtle dungeon, at this rate I won't be able to do any of the turn ins

I give up, i'll stay in town and do nothing for now

Some wierd purple like thing covers my face... have a look.

Could someone at least tell me if I should reinstall? Is anyone else getting the kind of sprite errors I'm getting?

Could someone at least tell me if I should reinstall? Is anyone else getting the kind of sprite errors I'm getting?

Some wierd purple like thing covers my face... have a look.

This issue happen also on Ymir, the strange thing, is that the Bolt Ears have a problem only in a position, when the sprite is up and look east.

Below some screenshot.
Spoiler
Here the sprite is missing on the head, while you find it near your feet.
You have the same problem, when you go trough the portals or is some teleport. 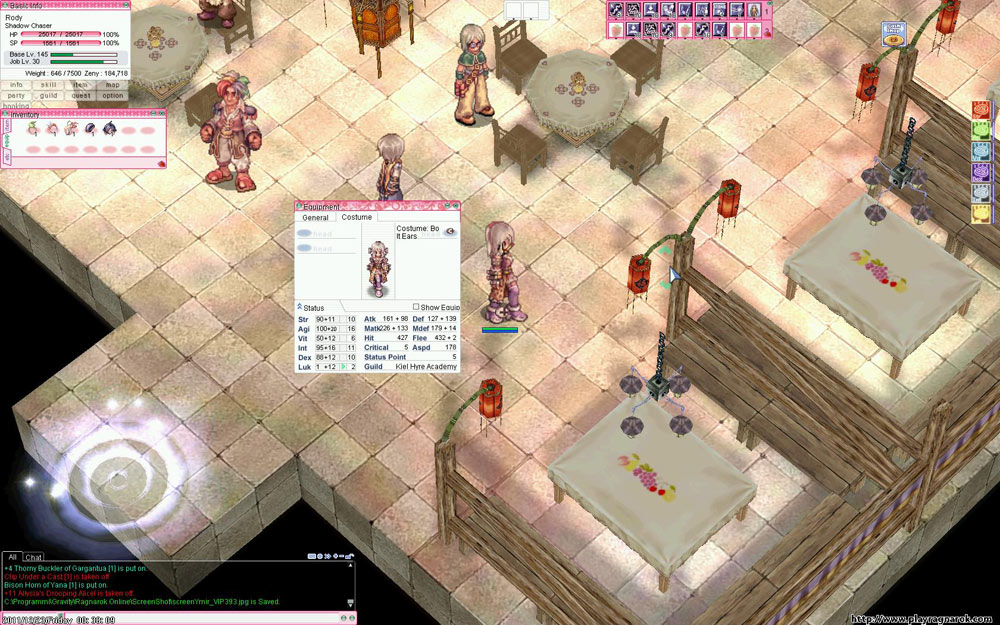 In these other 2 positions the headgear is in the right place. 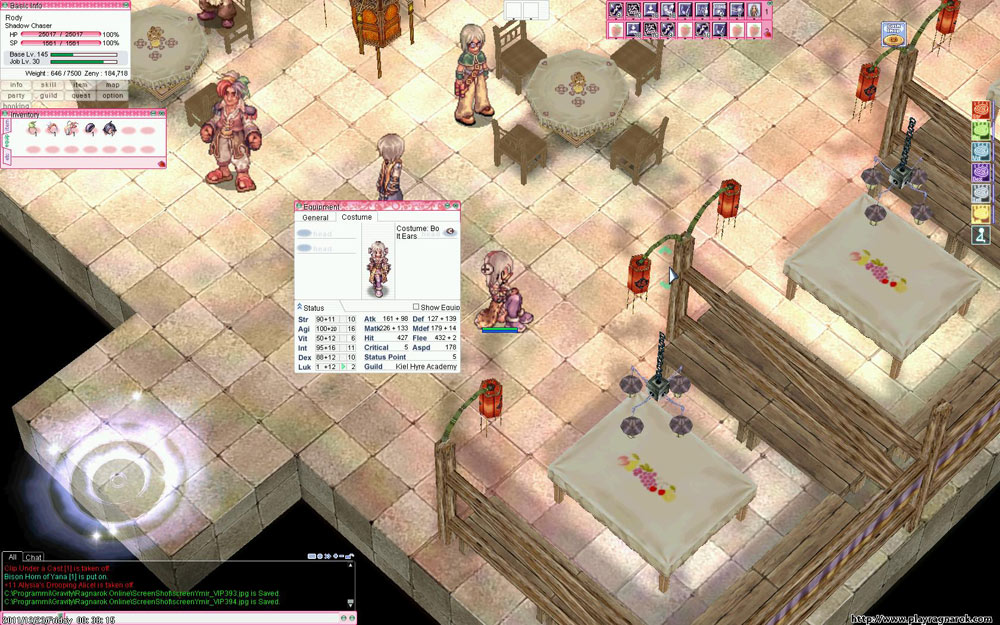 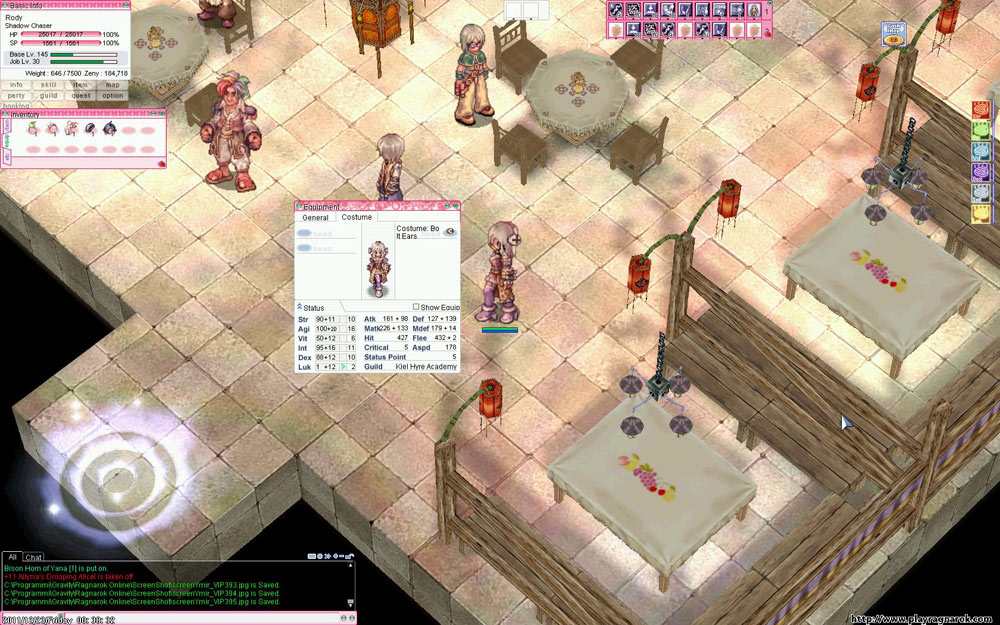 Same issue happen also in PVP zone on Ymir (at least I noticed that in Alberta PVP).

Rangers in camouflage who have striking, look the same as a non-camo Ranger with striking. Basically, it's hard to tell if I'm in hiding.

I'd like to report an overlap issue on the lvl 150 aura in relation to headgears that extend past the original sprite outline.

The issue is as follows: (visible in this screenshot http://s1071.photobu...Ymir_VIP023.jpg )
The aura from a lvl 150 character is displayed on top of headgear that extends outside of any character's original sprite outline and almost completely blocks out the visibility of that headgear.
The screenshot shows the effect on a handful of headgears, the black devil mask, ancient horns, morriganes helm, Crown of Deceit, sweet gent, and fantastic wig.
I have also run around to stand near characters with any helm that extended off their sprite and 100% of the ones I have encountered are also blocked out by the 150 aura such as; Any of the new
dragonhelms, PecoPeco Hairband, dress hat, sakkat and wanderers sakkat, majestic goat, skull cap, purple cowboy hat and others.

As I said, it seems to affect any piece of headgear that doesnt have part of a sprite behind them (if a character walks behind someone, their sprite blocks the aura and reveals the headgear of the original character)

This bug almost makes costume headgear invisible as you can see in this screenshot
http://s1071.photobu...Ymir_VIP024.jpg

I thought this should be brought to your attention and hopefully it's not a complicated fix.

Thanks for your time and take care
Liz

I don't have any issues just a suggestion. What about an HD Update of Ro1, because people will always play it because of how dynamic it can be. And, an HD remake would be awesome~! It's the trend now'a days look at all the HD remakes of our old favorite games coming out. :] That's all.

mounts have no death sprites anymore, you just get dismounted

I cant login with my character and in the loading screen pop up this error.

Hey i got this RWC Arms Box yeh and i double click and this item poped out with no image and i got error
and evrytime i point my mouse on it, it always get error.
can u help me with this? thanks

One of my accounts seems to be having issues again with the Champion's Wreath worn on one char. I cannot log onto any of the chars on the first page of that account. I get sprite errors. Already sent in a ticket yesterday after maintenance and the patch but no solution yet to this issue and that account is VIP so I am wasting $$. Re-installing the game did not fix it either.