29 replies to this topic

Ask your questions for Tiki Tuesday in the thread, and we’ll answer them on our Tiki Tuesday show airing this week! This week we have a special guest, longtime community super-artist Barachan! She’ll be drawing over our stream and on my face while I answer questions. The live stream will happen at 11:30 am PDT and we will be rebroadcasting it at 3:00 pm along with our This Week in Ragnarok show.

For today’s bit of history, we focus on the long-gone but not forgotten Clifton’s Pacific Seas. Founded in the early 30s as part of a chain by Cliff Clinton, this restaurant was converted to a faux Polynesian theme in ’39 during the original Tiki bar boom started by Don the Beachcomber. 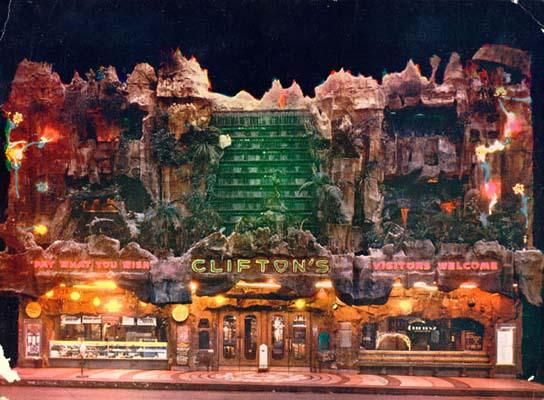 Cliff Clinton was an interesting guy, who provided millions of meals for little or no cost during the great depression at his restaurants, with a edict that no-one be turned away from his restaurants. During the dark ages of L.A. politics he worked to expose the considerable corruption that had infested nearly every level of the local government and had a bomb exploded in his home as a warning from crooked cops. Despite this and other assassination attempts on fellow reformers they were able to provoke a recall election that ousted the mayor. 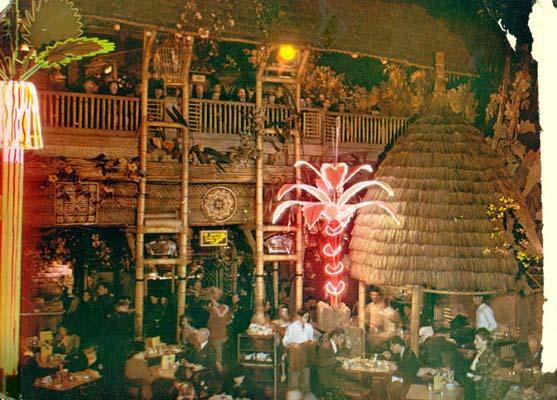 Pacific Seas became “the poor man’s nightclub” in Clinton’s words, an iconic hangout in the heart of downtown Los Angeles, and one of the early tiki restaurants in Los Angeles. It survived until 1960. 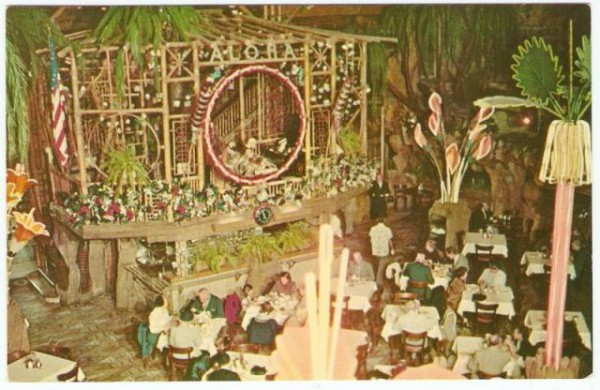 Further reading: Collector’s Weekly has an excellent write up on Clinton and his restaurants.

For the recipe of the week, we have a neat Pineapple recipe from Clifton’s restaurant

I would like to know if you have asked KRO for an updated Bloody Branch and Dead Branch list and also a new effect/animation update that is seen when you pop BB/DB?

What does oda mean?

what are the plans for rebalancing the new class specific hats? and will Ninja, Gunslinger and TKM classes be seeing a headgear like these or will we be left in the dust as usual? its bad enough extended cant participate in USRC but we constantly get screwed over when it comes to new gears.

when will the new rules for the Loading screen submission thread be introduced? i gotta admit it was very disheartening to see people who turned in commissioned works asking for special costumes when others submitted original works and were not used this round...

is that defective zenigata?

I'd like to make a suggestion, make it so whenever you log in and there are any kind of server exp/drop events you get a message to notify you (like how vip players get their own extra exp/drop message at top of the screen, but for server wide exp/drops). That way even if someone doesn't read the forums or the patch notes everyone would know if the server has increased rates.

Yes, that is something that we should be able to get to appear.

could you consider adding the HP/SP increase potions to the merchants buy shop?

This could include any other gene/alche craft potions that aren't available to buy in the buy shop too. (I have not tested them all but it would be really nice if we could have it all added in there for convenience :x )

Is it possible to reduce the level requirement of the Shrine Maiden Hat and make it equip-able by Priest / High Priest?

At this time, these are designed and balanced for third classes only.

What's the incoming plan on fixing inubashiri headgears. Can you give us a general timeline?

We are still reading feedback on these and doing testing on our own so I can't give a timeline yet.

Is it possible to reduce the level requirement of the Shrine Maiden Hat and make it equip-able by Priest / High Priest?

Also the dead man bandana, it looks like it's designed for linker's but the level restriction's above 100...

The level restriction will be changed this week to be from 100 to 99.

why is warpportal.com running so terribly

Is Sakray going to be fixed for USRC yet?

Will you revert the ranger hat (autumn headband) to the original effects(change AS buff to trap buff)?

People who want moar AS damage (even though their current damage already one-shots the mobs...but hey it's so cool to do 40k AS damage on mobs with 8k hp!) are upgrading the hats even without the enriched hammer guy and it's almost guaranteed there will be lots of QQ once you announce that you will change the effect.

That said, if you gotta change it (I think you should), then you gotta announce it as soon as possible to lessen the "damage" on people who have AS rangers but couldnt care less about traps.

Following up my suggestion last week:

- Please disable zeny limit on buying shop to prevent trollers who buy high but dont have money to buy it.

When will eat gear come?

Likely towards the end of the month!

Oda, do you remember stating this? I'd like to know what you truly meant behind it

Oda, do you remember stating this?

I'd like to know what you truly meant behind it

well...is there anything more behind that?

I know I asked this before but when do you guys plan on putting Troy & the Malandgo NPC back in? You said "TBD". Are we looking at another month, 3 months, 6 months, etc..?

Have the kRO scripts, to update our gear, to what they have, like the BDM for example, even been requested? if so why is it taking so long to get anything other than the FAW update? I believe I saw you say, that according to the contract, we had to wait 6 months, however it's been much longer than that on a lot of items.

You guys are gonna update the boxter with the current groove pack content and Dropping Eddga Hat, Shiba Inu...etc. Would you fix the hats that on +9 have no effect like Harvester Hat, RK hat?

What were the few best cosplays you saw at Anime Expo? And did you meet anyone you were looking forward to meet?

Hi Bara <3 A big fan of yours here! Just here to say hi, and I'm glad you're still active within the RO community! What brings you to the office though? O;

I'm wondering if we can get the update that decreases econ's by 30 when a god item is made. Thanks!

Can't think of any question so Hi Oda

well...is there anything more behind that?

why is warpportal.com running so terribly

It's not an error message, it is extreme lag when accessing anything account or payment related. I havn't heard of it running well for anyone I have talked to. It takes minutes to load pages.

Thank you for the clarification on that. I'll ask the IT and billing team to check it out.

It's not an error message, it is extreme lag when accessing anything account or payment related. I havn't heard of it running well for anyone I have talked to. It takes minutes to load pages.

It happened to me last week, but it seems to be fixed now o;