What is kachua? Probably should be explained better before we started giving feedback

Even though it's not kachua specific, please ask the studio for new costume enchant boxes, this will make incredibly relevant the normal costumes. Costumes will no longer be used for cosmetic purposes only but also for actual character improvement. For this to happen, please remove bio 5 costumes hats as valid options for costume stone exchange, this addition on the game was a big mistake made from a little one. You guys added 2 bio 5 costume hats in a costume box some years ago, making them available for costume stone box exchange. People noticed this and they started making a huge amount of profit (me included) since before, costume stone boxes were only obtainable via cash shop costumes, now you could farm this boxes by killing suras and rangers in bio 5. People got greedy and started requesting in the update maintenance threads every single week for the addition of the remaining bio hats to the costume stone box exchange list and you guys added them since it was something that was requested pretty often. Now, costume stone boxes are worthless since farming bio 5 costume hats is really easy.

This is some of my thoughts as for now. I will keep posting if I think of more suggestions.

When I opened 13 or so, I got about 4 "hits", an armor upgrade 7 certificate, 2 shadow gear boxes, and a general helm. The common drops included boxes that contained stat reset potions (got 5 of those), Yggberry, Defense scrolls, and Poison bottle boxes, and a single BSB. I know I've complained before about predatory boxes when the rates were bad, but I REALLY, REALLY, REALLY - don't like these.

1. I desperately want OCPs/Yggs back now. I went from VIPing 3 accounts every month, then spending the 1500kp x 3 on a new box to MAYBE buying a premium box if I felt like leveling. Every monetary system change has been a terrible, terrible backward step. You'd think they want us to spend LESS money instead of MORE.

2. Buying the boxes FOR keys is a terrible investment, a failure is almost throwing money away. The items that currently offer keys are uninspired, I ended up buying Infinity potions, but as nice as the stats are, I didn't really want them. I can't quite honestly say I'd want a lot of items in the shop even if everything came with a key. There's practically no value in the low end failures, whereas at least with OCPs, even a stack of BMx3 or uncommon junk gear still had plenty of value.

3. The massively compounded rng rates of the new Shadow gear boxes make me pretty angry, if you want a specific one, you basically just gotta hope someone's selling it because it'd take thousands of dollars to get the one you want. Just sell them direct in the shop or something.

4. I know we've had balance issues, but the fact that we aren't getting anymore jRO items is extremely depressing, I would take controlling, nerfing, and skipping the unbalanced ones any day over not ever getting them again. I could always count on jRO items to unlock new and interesting builds. No fun allowed, I guess. I was always willing to overlook the lack of contents if I got a fun toy, but when we stopped getting content AND new items, now my enthusiasm is just super low, I've only leveled 2 characters in the past year, and that took high exp rates to make me interested.

The "Butterfly Wings Box" is bugged. Once opened, it will give 3 yellow wings, and 3 types of apples. Each apple has a set of towns. 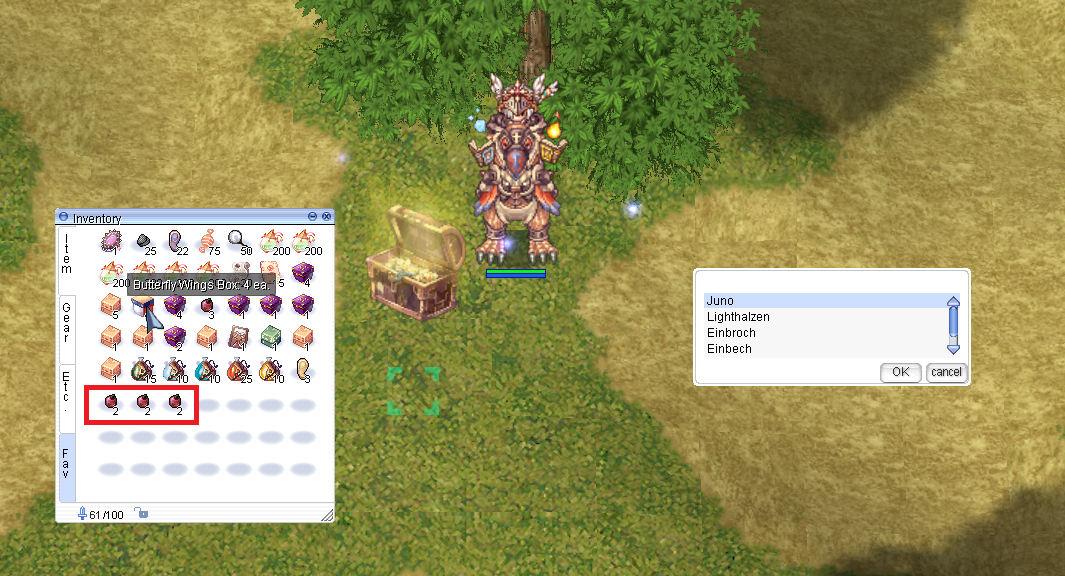 The "Butterfly Wings Box" is bugged. Once opened, it will give 3 yellow wings, and 3 types of apples. Each apple has a set of towns.

sell me some thief shadow pls

In my eyes, it's a disappointing system, but that might just be me being jaded by any Studio decisions.

2. the chance to get desired item is so low, i am quite hesitate to spend money on it

My feedback is as follows:

This item cannot be traded with other accounts.
Booster that activates energy in the body and greatly improves power.
ATK, MATK + 30, ATK, MATK + 1% for 30 minutes,
HIT, FLEE + 30, ASPD + 1, SP consumption 5% reduction,
30% reduction in fixed casting.
(Only the largest effect is applied to the% increase/decrease effect of fixed casting.)
When a character becomes incapable of combat, the item effect also disappears.
https://www.divine-p...base/item/12796
Translation:

Red booster
This item cannot be traded with other accounts.
Red booster that activates energy in the body and assists in combat. Be careful as it is a little burdensome on your physical strength.
ATK, MATK + 30 for 10 minutes, increase attack speed (delay reduction after attack by 5%), variable casting decrease by 5%, MHP, MSP-10%.
Activates 3Lv to improve concentration at a certain rate when attacking physical or magical attacks. (When the learned level is higher than 3 Lv, it is activated at the learned level)
When a character becomes incapable of combat, the item effect also disappears.
https://www.divine-p...base/item/12684
Translation:
ASPD Enhancement Potion (An ASPD potion that stacks with berserk/awakening/concentration potion I guess?)
This item cannot be traded with other accounts.
It is applied the same as the existing attack speed potion and the amount of attack speed increase may vary depending on the AGI.
A reinforced potion that has a greater effect when used with other attack speed potions.
If you take it, the attack speed increases slightly for 15 minutes. Can be used by former occupations.

It's a glorified Yggdrasil Ascension system, but quite a massive downgrade on how forgiving and safe it is on the rewards. It's back to the era where you can just get straight puppy* by rng. Life Insurance albeit mostly useless(specially at the quantity of 3) is still a cash shop item, but poison bottle box, acid bomb sets, cmon.

Change life insurance, poison bottle and acid bomb to HE Bubblegum, HE BM and Bloody branch

So you guys decided to release a new paid gacha system - called a weird nonsensical name with 0 explanation apart from a line in the patch note? Not even a list of what rewards you can get from the Kachua keys save for other players providing the info via 3rd party website?? What is this a new low for Warpportal?? Please, take time to inform the mass who might not be familiar with Kachua system what this is about.

At the very least with OCP you are able to provide a list of the contents via the main website page (which I don't know if you guys care anymore) since the bulk of these updates and the myriad of footnotes are done here in forum - again, not the best method of info delivery because the threads are like... all over the place.

Can we at least have the basic decency to at least provide explanation on these things especially when real money is involved? I get it that you are working hard to provide content for this game and that there are probably crapton of other things to deal with right now but PLEASE communicate better when it comes to paid content. Players of this game should be able to discern what they are getting from these "lottery" without navigating to Divine Pride or whatever. They all should be provided HERE, in this game's website or a thread somewhere - at the very least.

Thank you for listening.

1.Ranking so weird compare to old iRO gacha system, BSB should be around Rank B. Insurance is worthless tbh  and Ygg box give too little (15ea per box) when put this on Rank B

2.Shadow armor on SS rank is too weak, it weird to put on SS rank instead of same rank on Class shadow.

3.I thinks we still fine with jRO OCP than putting kRO cash items, there so many items that not broken the game (aka. Enforcer shoes) and enable alt build.

4.We doesn't have something like Gramp system, this is another downgrade the system that encourage player to buy more.

5.Can you put something that we usually use? , Something like Aspersion Scroll box or Oda Miracle buff pack. Now we got GiantFlywing that we already have Mistress wing. WOE wrap box??? why we need that anyway? when we can easily using AB to spamming warp inside inn.

6.Also where are Bloody Branch????? Is this really iRO request? or kRO just force you to put here? , BloodyBranch always iRO OCP signature that we still get some reward and fun after buying many OCP boxes.

6.Also where are Bloody Branch????? Is this really iRO request? or kRO just force you to put here? , BloodyBranch always iRO OCP signature that we still get some reward and fun after buying many OCP boxes.


Be grateful we didn't get Dead branches in this chest rolf

Love all the feedback so far because I agree with everything so far.

Still want to add my input.

From the item listed so far from the key table, there are a lot of things that need to be removed. First the common items are complete junk and not worth spending money. The common items should be the same from OCP, but reduced amount since each box is currently 200kp.

In general, there should be more boxes with the keys includes that are more useful to the community.

The Ygg Ascension system was great and this is a huge downgrade.

The introduction of the key system is terrible... No explanation and no official communication of how it works. Players with money are experimenting and finding bugs, bad rates, etc.

Was this tested in Sakkray?

I’m not putting any single dime on this. I don’t even know what’s the contents we’re gettin. Even staffs didn’t provide one with descriptions.

Weren’t the shadow armors given as rewards during events in the past?

Heya, not tryna discount the rest of your post, it's all valid, just wanted to address and answer this question only.

These shadow gears from the Kachua system are completely new to the server. They are different than the usual shadow gear we could get from TLAPD event and elsewhere.

It would be great if we could have clear descriptions on those new Shadow gears.

However, I can’t imagine the amount of money it would take to get a full set that you want.

For now, I am not spending any KP on the the current boxes with keys. My current KP is just sitting there with nothing useful for me to use it on.

with new system, instead of making new box with half of rewards already in sv like bsb enrich he. Now they have to update mostly exclusive kRO content like difference box but same items inside with changing number.
iRO still not really constant update like kRO have, we need to wait studio to decide. So this maybe long term iRO problem.

Back to Renewal Foundry