The servers are now closed. We will return in June.

Hello. Devs, can you say something?

hello. Devs, i'm worried about you, are you alive?

The servers are now closed. We will return in June (2040)

.-. i'm really hoping to get back into the game eventually

HEY MODS/CMS! IT'S JUNE! TIME TO GIVE US AN UPDATE ON THE STATUS OF REQUIEM!

MAYBE DO YOUR DAMN JOBS AND REPORT BACK TO THE COMMUNITY

HEY MODS/CMS! IT'S JUNE! TIME TO GIVE US AN UPDATE ON THE STATUS OF REQUIEM!

MAYBE DO YOUR DAMN JOBS AND REPORT BACK TO THE COMMUNITY

Well all are waiting

Moderator, seriously, write what's there? The person who promised to open the game, is he missing? Or is he busy with his own affairs, he is not up to the game? I come in every day to take a look, silence.

The production team are -_- incompetent

Just start the game with the anichit normal and that's it. And finish everything in the process at once, you won't do anything...
Tips on the game, I can tell you what to do first of all 1) remove def from mage classes by 50-60% from things 2) strengthen the skills of the agra protector class 3) reduce the stats of the last sets by 50% 4) remove the defense debuff from the necromancer and return it to the protector 5) reduce the stats of weapons and jewelry by 50%

Admins, I don't like talking to the wall. Where is Helium? Can I assume that he deceived me with the opening of requiem? I'm not used to fighting the consequences, I always destroy the cause of the consequences. Can you answer humanly, will there be a game or not? I think I have a job again.

See, the problem is you let the Xenoa take over your game.  You had these elves, right?  And you all were like "Hey, look at those little elves.  They got new animations and stuff!  They make high pitched noises!"  And so you didn't see them taking over your game.  They took over banking, the auction house, combat grounds too.  They justified endless class tinkering to alter the dynamics between the races and next thing you know, you look around and battlegrounds are different, the gameplay is different, and even the music is vastly different.  The game no longer felt the same way that drew you in to begin with.

All because you failed to swiftly and decisively end the elven menace those many years ago as I suggested.

There are 7 days left until the end of the month.

There are 7 days left until the end of the month.

We are currently still in development for the game. We apologize for the delay, more information will follow soon.

Gravity, what is the story here? Is Requiem going to be re-released? It seriously undermines confidence of your stated plans for a relaunch when you are not making any statements when the game was supposed to relaunch this month, and then saying nothing when queried about it's status when it is near the end of the month that it was stated for when the relaunch. Even posting an update to say that there are delays is something. If the game has been permanently shelved you do owe it to the your consumers of your game to let them know that the game will not be returning.

Should we start with the memes?

Maybe it was all a plan. To kill the project without saying it.

Don't worry guys, bet they're gonna give us a 50% froge eveny in order to compensate this unexpected

I'm still here for the Memes

I'm still here for the Memes 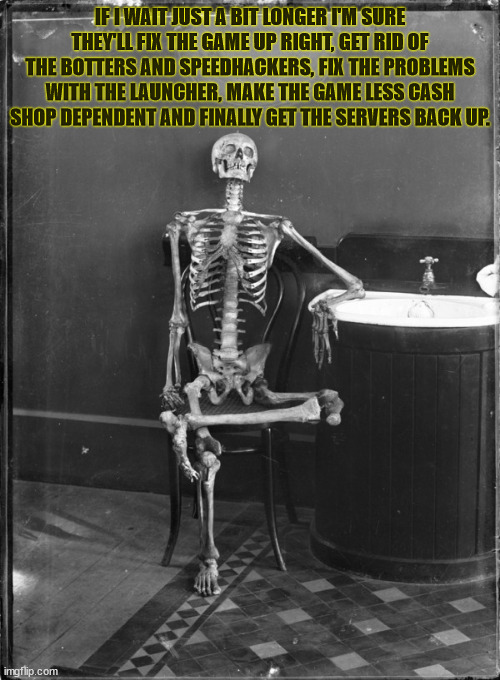 Helium is your last day left, if you deceived me, I will send you to hell where everyone will laugh at you, and the place where you live and your people will be burned.