39 replies to this topic

has anyone figured out how to do this?

Someone Must know how to make this.

Why does no one know how to make one. GM can you put in a npc with this so I can test out the skill.

The problem is that everyone knows -how- to make one, but no one has any idea -where-. I'm not even sure if the NPC is in the game right now.

Anyway, if they do put the NPC in, you should probably go hunt 30 flexible tubes, because I don't think any of the NPCs sell those.

I have looked all over the place. Only thing I can find about it is that you need a brocca. If anyoen has a link on where or even doddler might know how to make. please share.

Ok from what I can find out, there is suppose to be a npc for makign the Pile Bunker name bans. People say he is around the 5 o'clock in pront. But can not find. maybe I got the wrong town.

Bans is supposed to be at this location: 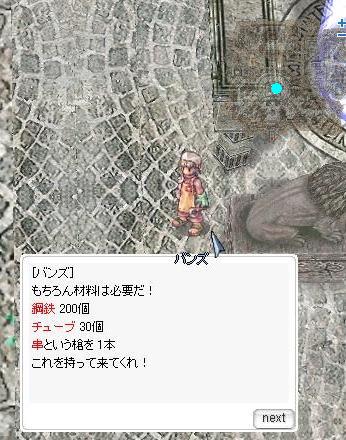 Thanks doddler for the info. But its not there. I sent in a ticket. I hope the gm team will put it in soon so I can do my testing.

I still got nothing from the gm team on this. Hey GM TEAM, can you get off your coffee break and put in this npc tonight please.

I see still no bans npc in juno, no work from gm team. Wonder why people even try to get things fixed.

Either you guys fail at your jobs or dont want to do it, or maybe you dont want to put in this npc to make this Pile Bunker so we can test it out. I think I am inclining to choose you fail at your job. and yes I am getting upset abotu this because every other class gets what they want, why cant this one too. If you do not like it, I believe you can kiss my a##.

Damn calm down, the GMs aren't sitting there waiting for you to post so they can instantly rectify everything the moment you post it. This is a problem, and I'm sure it will be looked at before it goes live. Think about it logically. If an NPC is missing, that means that iRO was either a) not provided the NPC code by Korea (which wouldn't be surprising as they missed several things, renewal is a big update after all), or b) the NPC in question was for some reason not translated. In either case, there's no reasonable way that they can fix it within hours of your rather demanding posts. The GMs are here to work on the game, and I doubt they appreciate being told off.

its been 2 days, I posted sent in a ticket. Not one damn word from the gm team about this npc. I understand and know about the renewal update is big and alot of info is being worked on. But at least say something about this problem. maybe I did go over bourd on telling the gm's off, that could because either I am very pissed off, or I am cranking from quit smoking, or both. Either way I would like a GM to say something about it or fix it.

Hmmm still no word from anyone on this.

its been 2 days, I posted sent in a ticket. Not one damn word from the gm team about this npc.

hmm... I work in a service desk myself professionally. While we can't and won't guarantee resolution on minute things like this, I am not allowed to go more than 24 hours without /touching/ the ticket (that is to say, attempting to contact this customer!). Seems like Gravity's help desk is very unprofessional if they can go 48+ hours without contacting a ticket submitter.

hmm thing I find interesting is there are npc's selling equips.
If the NPC to craft one is missing (and maybe its intentionally missing as they're aware of a bug or something) they could at least add the item to the NPC's in Prontera selling weapons? That wouldnt be hard to do and would at least allow mechanics to test out a skill that until now can't be tested.

I have been in customer service all my working life. I would get fired if I let a complaint go more then 24 hours with out at least touching base with the person. I am how ever use to it by the gm team. I know there is alot of people that want to test out this skill and I just want an answer as to why, what is going on.

Without meaning to sound like a crawler, I dont think it's right having a go at the gm team etc saying its poor customer service. It's a beta after all, you should be aware things may be faulty and need addressing, and they will be fixed (hopefully) in good time.

I think we have to accept we aren't in the skill testing phase yet, so they are probably focusing on other things. As a beta we have to understand they have priorities and a schedule to stick to for testing, even if it is frustrating for us seeing obvious things to fix. I guess if it isn't fixed before going live we all have a reason to shout and curse and complain and ragequit

Gravity support (at least for iRO) is dreadfully understaffed. They have the same people doing support, implementing renewal, and maintaining the servers (which seem to be particulularly flakey.

And on a more personal note:

YOU ARE PLAYING ON A TEST SERVER!
You should have NO EXPECTATION THAT THE GAME WILL WORK, and NO EXPECTATION OF TIMELY SERVICE.
Most likely the pile bunker NPC was written on the list of "NPCs that need to be fixed", to be looked at once the FAR MORE URGENT issues in renewal are dealt with. Maybe you haven't noticed, but there are some pretty nasty bugs still in renewal, that make the lack of a Pile Bunker look like a very minor issue.

It's like complaining about a missing manhole cover after an earthquake (which is not a bad analogy to renewal, at least in the state kRO gave it to us!), and being annoyed that the town is trying to fix ruined bridges instead and put out structure fires instead.

I know its not that big of a deal, but it would be really nice to have some kind of gm responce to it.

It has nothing to do with expecting things to work or expecting a resolution. Even with them being understaffed. I work for an company with like, 1,500 or so customers, and we are a help desk staff of 4 people. We rarely let a ticket go more than 5 hours without being responded to and have an SLA of 48 hours. In practice we try to touch it within 24. I am the tier 1 person (answers the phones, makes tickets for customers) and if I don't touch one within 24 hours my supervisor takes the ticket from me, contacts the customer from me, and then chews me out. How Gravity doesn't have the ability to contact their customers within 48 hours mystifies me. I've heard stories of people waiting over a week to get a reply from Gravity.

This is a test server, Heim had said previously:

I've told the support team to tell you to post here.

Now what does the pile bunker do and we can see about how to acquire it.

What do you mean 'what does it do'?

Back to Renewal Testing