69 replies to this topic

Berserker Class Update:
The Berserker is getting a more serious round of changes.
Prior to update 173, Berserkers were known for their high critical damage. While the concept of a rage fill melee character was envisioned, it was never portrayed through the character's skillset or style of fighting. Many of the Berserker's skills were limited duration buffs and their offensive choices were limited to only 2 (3 if you count the Burning Dash). While there were small nuances between a warlord and berserker, overall it felt very much the same.
Post update 173, we envision the Berserker as a melee maniac that ignore's their own physical well being in order to obtain the most damage as possible.
One of the biggest changes to the Berserker class is that their abilities will no longer use mana. The Berserker instead will be using their own health as a way to use their newfound skills. Another big change to the Berserker class will be additional ability to use Dual Blades as a new weapon option. The whole Bartuk Warrior branch will be able to use Dual Swords, but the Berserker are intended to be the Bartuk's master of the weapon.
Berserker Tree Before: 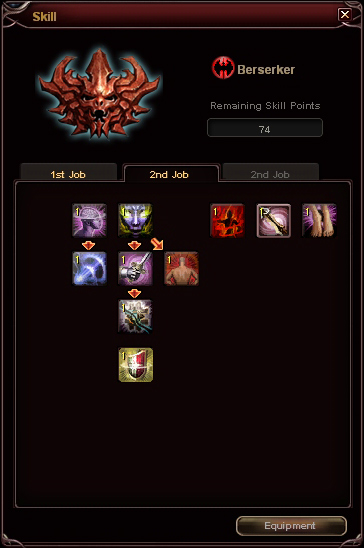 NEW SKILLS:
While these changes are definitely going in in the next update, we will continue to monitor in game statistics as well as player feedback.

Yup, not as potent and long lasting as well as a heavy cost to your own HP.

40k HP zerks... whats is the skill left side of rend flesh..

40k HP zerks... whats is the skill left side of rend flesh..

That is just a new icon for burning dash.

alteris could you give us some information about the new skills that deals with damage, if they are AoEs?

I hope this changes balance the game

alteris could you give us some information about the new skills that deals with damage, if they are AoEs?

Berserker is targeted to be a Single Target DPS. The idea is they are zoning out all other distractions to obliterate their target.

convert all mana and add it to hp? that would work pretty good i think =D ...blood magic type thing i guess.

the leech skill would have to be very spam-able.

Berserker is targeted to be a Single Target DPS. The idea is they are zoning out all other distractions to obliterate their target.

so are you done with elementalist changes? no party buff for holy bliss?

so are you done with elementalist changes? no party buff for holy bliss?

Helium is not done with the elementalist changes. More changes will be revealed at a later date. I believe the Druid is the next one to be revealed.

k thanks for responding!

I like the direction this class is going in.

I'm just curious, which of these skills did the community suggest?

u understand that if beserker is not capable of leeching life back with every skill it will not function correctly??? ...right??

the whole point of using life as a mana resource is being able to sustain that source with over abundance of skills that leech life back to the attacker.

if there isnt a passive that grants the beserker the ability to leech life back through skill use it will not function correctly.

Ins't there too much scarify of HP?
plus instead of using MP every skill will consume HP instead?

Or will the damage compensate the massive HP drain?

So we might die trying to kill a prot even if he is Afk?

u will remake all calsses ?

but i can`t imagine Bartuks with Dual Swords....

why not fix the old Problem with Attack Power on 2H Bludgeon and 2 Axes first?

nobody use em cuz of that right now.

Nice!!!!
But you should change also +30 system to balance game.