i will put them on a lindy but iam lvl 137 right now will i be terrible idea to put them on +10 Tae Goo Lyeon ?

it's not unusable, but why are you wanting so bad for it to be on a TGL? delay wont help you on IB spam, and it has lower atk than other swords

Depends on what you want to do. If it’s just for damage, Violet fear is a really good choice. However, you can’t reallt use parrying in very heavily mobbed areas so the defense is lacking if you are not one-shotting.

I myself encourage using RTE+ shield for the three seyren cards while leveling. Generally the smoothest way to level is just to IB and cast spear dynamo straight away, so you can keep moving and IB 2 seconds later. The shield really helps.

If damage is not the concern there’s a lot of choices actually. You can even just slot one card into a thanatos spear or thanatos great sword if the damage is sufficient. Helps you get HP/SP leech too.

thank you so much  blackCROSSCY

this thread is the reason why iam doing RK

all areas listed on their lvl range are valid

Ok one last question what skills do you get for Lord Knight and Rune Knight then if I'm going Crit build?

Well I'm doing Dragon Breathe but I don't know how to do the stats as I level either.

I want to do this:

But I have no idea how to do the stats as I level lol except have dex to hit and agi to dodge and str to hit i just don't know how to balance it o_O;;;;; wtf. I donno man.

my skill points for hybrid db is here:

You can go play around on the calculator. For crit build, the buffs you need for LK are

For RK, it's just

Rune mastery contains several rune stones to get buffs, but it does cost a bit of time and effort to make runes.

Question. Is viable to go ignition break knight as a final build? Got interested in doing one.

Any newbie tip would be welcome. Thanks in advance

ignition break is more commonly used as the AOE mob skill for non-DB builds. It has large burst damage but the cooldown is too long so the overall DPS is subpar.

You may just go IB first while leveling and add on critical gears for single target MVPing later on when you can afford it. If crit is not to your liking, hundred spears+IB also work but that is better off when we get illusion turtle update for hundred spears to have only 1 second cooldown.

Do you have a Dragon Breathe Skill Tree I could use?

Sweet thank you very much. Now to get there XDD

I donno what stat to work on when I get Vit to 50 and I'm doing the Merc route that's all I need to know just this and I can figure out the rest.

Why don’t you get str then reset when you get 99?

Well I did 99 agi 99vit BEFORE reborn I just don't know how to distribute stats when I'm high Swordsman.

Thank you for this guide

Lot of useful information. After playing around RK for a bit , I am beginning to understand this guide better .

my current RK leveling with BB>IB 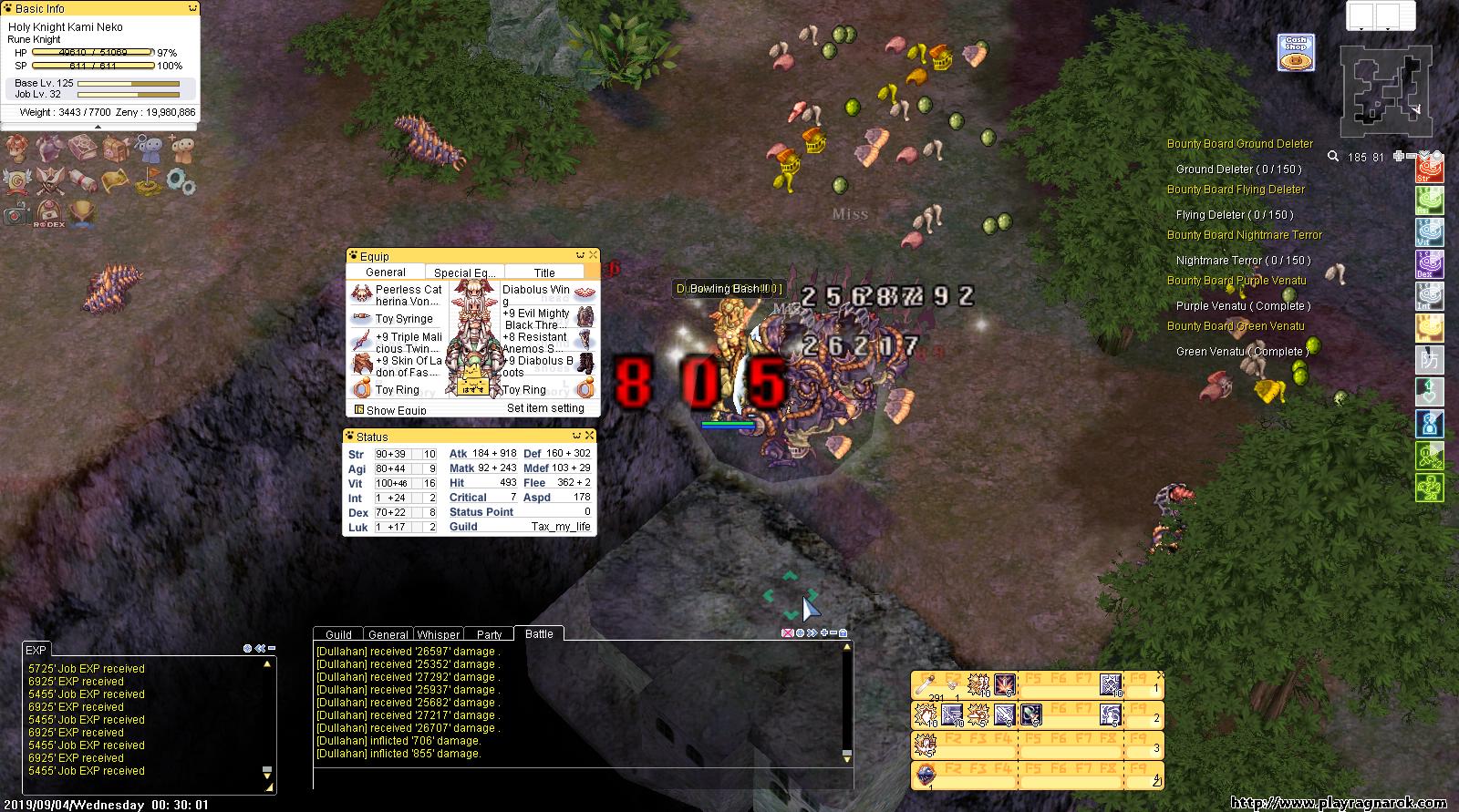 and this is my max Lv. main RK  example stat / gear 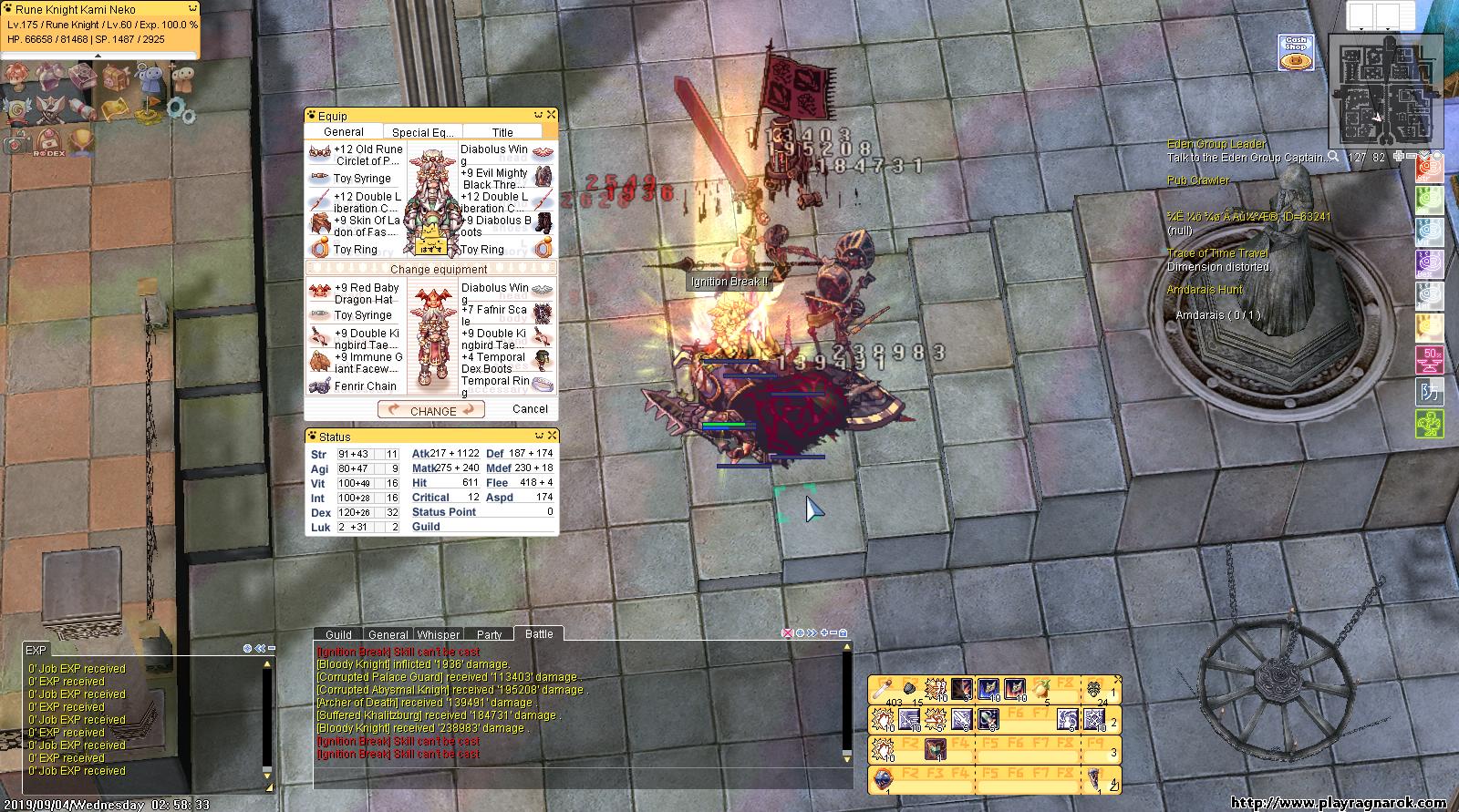 Question... nidhogurs garb leech gets deactivated if you have an evil dragon armor?

ignition break is more commonly used as the AOE mob skill for non-DB builds. It has large burst damage but the cooldown is too long so the overall DPS is subpar.

You may just go IB first while leveling and add on critical gears for single target MVPing later on when you can afford it. If crit is not to your liking, hundred spears+IB also work but that is better off when we get illusion turtle update for hundred spears to have only 1 second cooldown.

Thanks a lot for the response.
im starting my knight, have a long way to go but want to have some ideas.

i mostly interested in an all around frontliner, who can dish out some dmg and tank some enemies for my pals and maybe WOE. Not looking to solo every mvp out there. Im used to play the vit knight of old, and the pure IK resembles that playstyle for parties.


I have a warg ranger for having mvp fun anyways

Pd: question... future HS build will need agi? Could be interested in that one in the future. It is dependant on a spear that has not been implemented right?

Now that we have the rune improvement, what would be the budget crit build? Where can one cut costs just to farm some instances(what is absolutely needed and what is not)? Is STR still the recommended build for players on a smaller budget?

Crit should be the default build for physical RK now (unless the focus is on WOE). STR build needs to wait for the illusion Abyss update to allow 1sec CD Hundred Spears; otherwise the DPS for single target is too low due to high cooldowns on both HS and IB.

However, it still makes use of the same AOE skill for mob clearing, IB+BB (sometimes storm blast), so you can add the STR part of your build first for faster leveling early. (just aim to have 193 ASPD+ 120LUK at the time you want to start MVPing).

In the case of budget build, it is hard to suggest one without knowing what you mean by budget (below 1B? 100M? 3B?), since iRO has so many items now due to 30 OCP boxes already.

Back to Swordsman Class