93 replies to this topic

On Sakray we have a Summoner test going.

Go to geffen tower with your party, someone choose to talk to the admin to get the items to summon, and then try out GTB.

The feel of it while you are in the Summoning room is what I want feedback on, and to some extent the "cost" and duration. More monsters can be added if this is favorable, and likely can make it an instance so it is no wait times.

Please give feedback here, if your only thoughts are "hate it" please don't state that, give reasons on how you would want it different so we can see what points of view you have. Summoner is something we want to re-enable fully in April so lets get some testing!

Can't seem to be able to summon. The Summoner npc is stuck at the part :


Character is VIP and got the required items from the Summoner Admin. I tried adding a char into party but no luck. Moreover, Reset stones that the admin gives are missing their sprite and may cause client crash if clicked.

Will probably test it tonight when I'll have some free time (my wife is no longer interested, so cant test right now).
Just one silly curiosity, how are more monsters supposed to be "favorable"? Maybe for some M?

Does not work for me as well.

Would you mind noting your character name, class and level?

i try test summoner and Summoner NPC tellme you need VIP and EMB, im VIP and the NPC side Summoner Admin give me 2 EMB and 1 troll Reset Stone, so i try open and look (one click for gain error

Same error as Beata.
Summoner eats the Reset Stone for 3 day access then doesn't proceed further than "Ok, talk to me again and I will let you know what the requirements are."

We're looking at this issue right now, please do test if you haven't already. Is the VIP message popping up for you when you log into the game?

We're looking at this issue right now, please do test if you haven't already. Is the VIP message popping up for you when you log into the game?

Still stuck at the part where I mentioned in my first post. The reset stones now have their sprite. About VIP status: I tried a none and a VIP account but that didn't do it. I do see the VIP message when I login to the VIP account though.

Im VIP and NPC continue trollme >:
but error is fix

Did you patch the main client first, and run both in admin mode?

Tried the summoner once again: 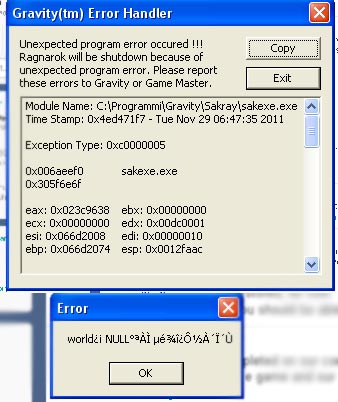 Note: I will be leaving the country for a week tomorrow so except maybe for next morning I won't be able to test further (and smae for my wife).

Just tested again with my wife on the characters above.
For one, the summoner was saying that the quest was still actie and had to talk to the flame to reset it.
Once you reach the waiting room we waited there for a while and nothing happens.

P.S. Leaving today, if I'll find some wi-fi hot spot or an hotel with a decent internet connection might try again tonight.

Did you patch the main client first, and run both in admin mode?


Hi, yes it is run in admin mode. I am suppose to install sakray on another folder, not in the main folder right?

I am testing it w/o regular vip. the reset stone seems to work fine, BUT i have been waiting to summon the mvp for like 15 mins not sure if its bugged or someone is in there... Im going to assume theres some issue with actually summoning the mvp

Has anyone else be able to pass the waiting summon room at all?

As a level 4 novice, I'm stick in the "Room 1 Summoning" room
"You are not the required lvl." and there's no portal out, relogging doesn't work either.
What happened to the job changers? All that's left is the mech/gen one...

I am testing it w/o regular vip. the reset stone seems to work fine, BUT i have been waiting to summon the mvp for like 15 mins not sure if its bugged or someone is in there... Im going to assume theres some issue with actually summoning the mvp

Can you get me the name of your character? Please post here or send me a PM please.

Can you get me the name of your character? Please post here or send me a PM please.

Issue: Can not get the summoner to summon and is stuck there

You will face 2 waves of mobs that apparently spawn in the natural map of a given mvp or its own minions, in this case it was Female thief bug and male thief bug. You will have to clear the 2 waves till the MvP is summoned.

From the look of it the MvP spawns randomly in the summoning map along with random mobs of the early waves. The good part is that, if you disconnect while doing the summoner you can get back in through talking to the flame.

The whole process is interesting now and I personally like it. The required mats for GTB are reasonable imo which are 2 badges + any of the loot [ golden mace, golden gear, golden bell ]. Having alternative options is alright but I wonder how other MvPs will follow the scheme since some have barely no significant loot.

Glad to see that now it's finally working.

The 2 waves of mobs spawned for the GTB are fine; however the number of monsters should be scaled based on their difficulty. For example the same number of mobs of Vesper, Gloom or Kiel would probably be too much.

The cost for summoning the GTB is ok. It's particularly good the fact that you have several options for the MVP specific drop. I hope that the same approach will be used also for the other MVPs. I'm also concerned that some of them are lacking suitable drops for this. For example Dracula only has specific drops with a rate between 0.06% and 0.16% that is too low, and the other drops, except for the Yggberry are NPC buyable.

It looks like the summoner is no longer working for non VIPs.
It asked and took the reset stone, but then says that only VIPs can summon the MVPs.